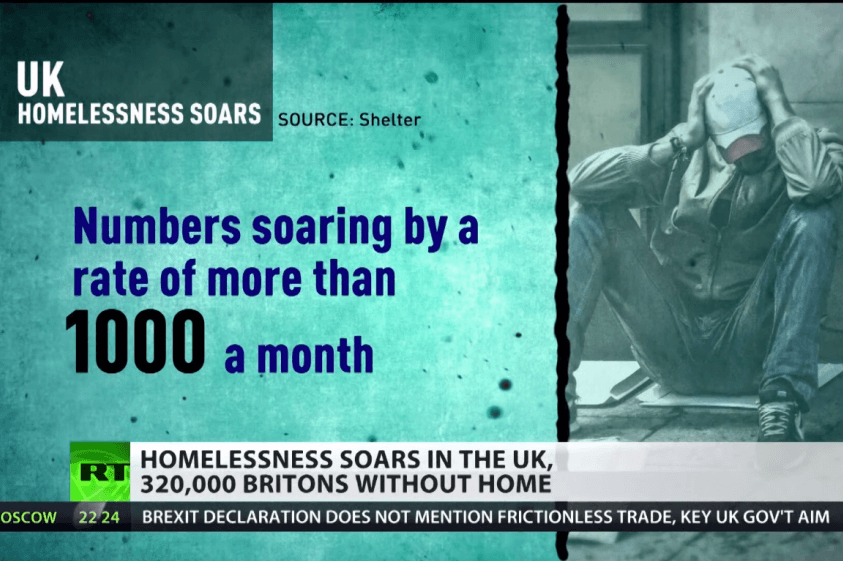 The British Government has been slammed for allowing homelessness in the UK to reach shocking levels. How can anyone possibly ignore the fact that one of the word’s top 10 economies has so many people sleeping on the street.

Here are some statistics about homelessness in the UK…

People in desperate need of housing are being overlooked in favour of immigrants. Even though there are many from within Europe, genuine migration from within Europe is a very positive arrangement for all of us, the only problem has been that there was too much, too quickly.

Countries like Greece, Romania, Poland and Bulgaria were dragged in the EU far too early, long before their economies were anywhere near the EU average. Therefore, it was inevitable that millions would pour out of those countries in to Western Europe, causing a vacuum that has had drastic consequences.

The situation with immigration from outside Europe is different, the numbers have been increasing constantly and we have not even reached the epidemic proportions that are yet to come. This is not happening by accident, Globalists like George Soros who seem to thrive on creating misery for others have no concern about the damage the agenda they are supporting is creating in fact…..he is part of the agenda that is encouraging it.

This is not immigration, this is a planned invasion of Europe and the ultimate extermination of the European people. Anyone who raises an objection is labelled as racist, the narrative is encouraging white people to be ashamed of their race, their culture and their heritage.

We are seeing a constant stream of brainwashed Snowflakes, sat on Youtube crying about the lack of sympathy for immigrants………..REALLY? I think they need to get a grip with reality, do they really think that displacing our own population to make way for these people will change anything? We have only taken in a few million in Europe and we are already swamped and overwhelmed!

Well here is some food for thought………

World population is officially quoted as being 7.54 Billion as of 2018

That my friends means there are SIX BILLION PEOPLE who have the motive, the will and currently the support of the political classes to head for Europe! Give that number a thought for a moment, SIX BILLION………….that is SIX THOUSAND MILLION people!! If 10 million were to come to Europe that would spell disaster, if 100 million came, we would be wiped out, but that number would not even scratch the surface!

The point to note here is that this cannot be solved by allowing these people to move here, or allowing ourselves to be wiped out, the key is to protest the people who are making these people’s lives so miserable that they want to head here in the first place. Do not be fooled by the narrative, Blair and Obama WERE NOT  good leaders, they dropped more bombs than anyone, in fact…..Obama dropped TEN TIMES more bombs than Bush!

These people and those who replaced them are making this happen and that IS NOT an accident, or a side-effect, it is part of the plan………………..so ask yourselves why!