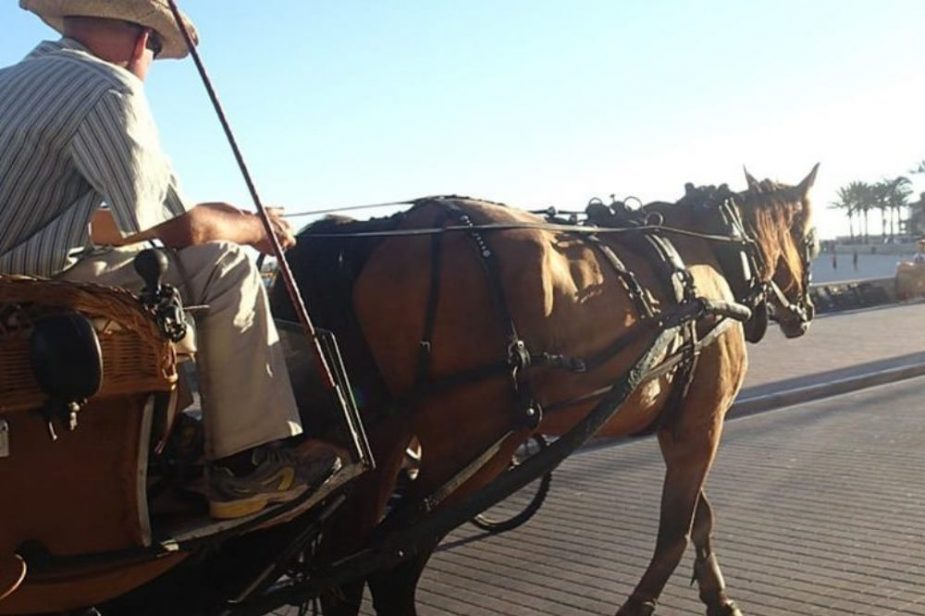 The man, who was a horse farm owner at the time, filed appeals against both convictions which were rejected. After his release, he applied for and was granted a licence to run a horse and cart business offering rides to visitors in the harbour area of Paphos for 2014, 2015 and 2016. Paphos municipality sources have told the Sunday Mail that he was not given another licence after concerns were raised over his previous convictions and possible inappropriate conduct because he was transporting tourists and their children.

But last summer he was then given a licence by Peyia municipality to transport tourists along the Coral Bay strip, and last Christmas – dressed as a Father Christmas elf – he gave festive rides to children at the Peyia Christmas Fayre. This case, according to Children’s Rights Commissioner Leda Koursoumba, is a glaring example of shortcomings in the existing law in force only since 2014 which forbids those convicted of child sexual abuse, exploitation and offences concerning child pornography to hold jobs that have to do with children.

But the current law is not retroactive. The ban does not cover those sentenced before 2014, Koursoumba said, highlighting the gap in the law and the national strategy to fight sexual abuse and exploitation of children. “If everyone’s wish is the wellbeing of children, they ought to be amended,” Koursoumba told the Sunday Mail.  The law, she said, needs to be amended so that it covers those convicted before 2014, “for the protection of the children”.

Yet another legislative loophole meant that in neither Paphos nor Peyia did the convicted child abuser have to provide a clean criminal record from the police to obtain his local authority licence. At present, those wishing to offer horse carriage services must obtain what is known as a street vendor permit from the local government. To issue such a licence, no clean criminal record is necessary.

Peyia mayor, Marinos Lambrou, told the Sunday Mail, he had no idea of the man’s past but that he had been given a permit to carry tourists in his horse and carriage after presenting all requested documentation. “He had all the relevant paperwork, concerning his horse and insurance coverage,” said Lambrou. He said that this concerned only a month last summer.

“If all this is true, it is sad, and of course, we will not grant him a licence in the future without a police clearance,” Lambrou said. According to Peyia municipal secretary, Marios Matheou, the man was given a street vendor permit which expired at the end of 2018.

“There is no provision in the law to oblige a street vendor to present a clean criminal record,” Matheou said.

He added that because no provisions in the law on municipalities cover a special licence for the commercial use of horse and cart, applicants obtain the same one as street vendors. A source told the Sunday Mail, that in the case of the Paphos municipality, it was actually known that the man was a convicted child rapist before he was given a licence.

As the municipal council members opposed to him getting a licence were outnumbered by those in favour, he was able to operate in the town’s harbour area for three years. The thinking behind the move was that he had served his sentence for his offences and was entitled to make a living, the source said, adding that the area where the carriage was operating was crowded, well-lit and had security cameras, thus eliminating possibility of misconduct.

But in 2017, the Sunday Mail has learned, Paphos mayor Phedonas Phedonos stepped in and refused outright to have the man’s licence renewed. But for lawyer Anastasia Papadopoulou, who is also the head of the council for the implementation of the national strategy to fight sexual abuse and exploitation of children and child pornography, even if local authorities did not technically break the law in this case, they ought to be far more vigilant in such matters.

“Employers must ask staff working with children to present a document that they have not been convicted of any sex offences against minors,” Papadopoulou told the Sunday Mail. Even though the man was not a local authority employee, as he was only given a licence to run his horse carriage, because he worked around children, authorities should have asked for this type of documentation she said.

“They must be more sensitised over such issues,” she said.

By 2017 Paphos municipality had learned this lesson. In its call for an expression of interest for licences to horse carriage owners for 2017, it included among its stipulations a clean criminal record. Koursoumba told the Sunday Mail that the case also raises serious concerns over the vagueness of the current law listing jobs that deal with children.

“It is clear for some professions, such as that of the teacher, but for others, such as street vendors it is not,” she said.

The commissioner said that a list ought to be made specifying these jobs by assessing the risk to children to make it easier for employers and members of the public. According to the 2014 law on the Prevention and Combating of Sexual Exploitation, Sexual Exploitation of Children and Child Pornography, the court has the power, along with the sentence to someone found guilty of such offences, to issue a decree which prohibits or terminates the employment of the convict in places frequented by children.

The court can also ban the convicted person from staying in the same residence as the victim or other children, or in a space adjacent to either the house of the victim or of other areas where children frequent. A lawyer told the Sunday Mail, however, that this is not that common.

The same law provides that persons convicted of such offences will permanently have this on their criminal record. Justice Minister, Ionas Nicolaou, said on Friday that a bill to amend the 2014 law would be presented to the cabinet on Monday for approval and sent to parliament for discussion. The bill, Nicolaou said, aims to cover gaps and omissions found in the 2014 law over the past four years.

It is beyond belief that this sick predator has been allowed to work with the public after raping a child. He was sentenced to NINE YEARS in prison for the rape of a FOURTEEN YEAR OLD GIRL and then allowed to work in a situation where he could, would and has come in to contact with children.

Cyprus does not have a Sex Offender’s register, but it is long overdue, there is far too much being covered up, far too many incidents of families covering up for sex offenders in their family, or sick people like this being allowed to carry on as normal because they know the right people, this MUST STOP NOW!

Those who cover up for paedophiles are just as guilty as the perpetrator!

There is a petition for a Sex Offenders Register in Cyprus that I have been more than happy to help get off the ground, if you are reading this, please sign it. You can find it HERE!