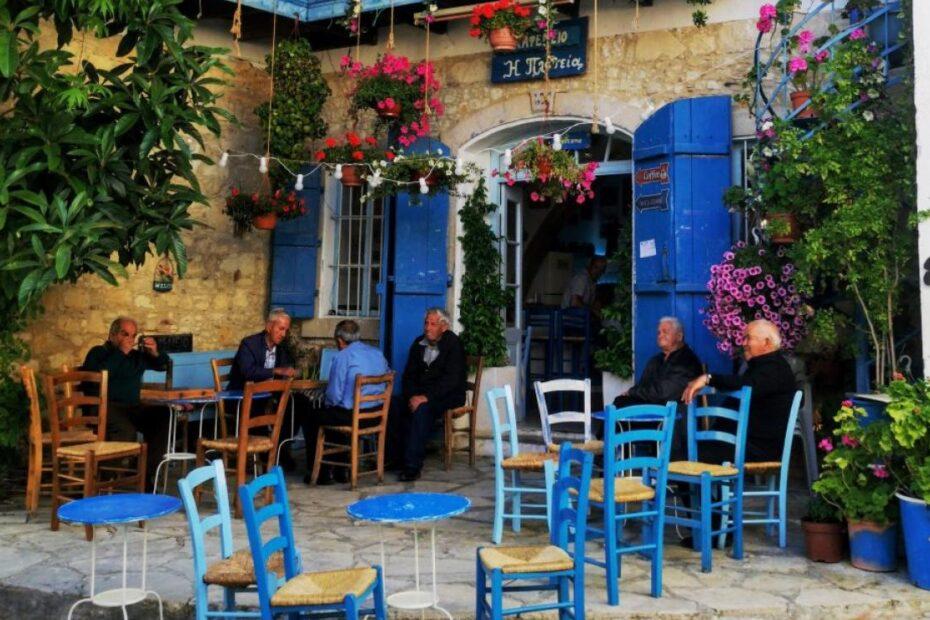 It’s 1973 and mum & dad (Kyriacos & Ellou) decided to go in to business, was it Double Glazing? A Cab firm? A Painting & Decorating Service? No…..don’t be daft, it was a ‘FISHATIKO’ That is the ‘Greeklish’ term for a Fish & Chip Shop. Ours was in Northampton, a town off jct15 of the M1, with a Cypriot community of less than 500.

Now at that time, this was still the first generation that came over in the early 60s and before the large influx in to London after the 1974 invasion. So as you can imagine, they had all the Cypriot ‘traits’ customs, behaviour and accents that were for all intents and purposes ‘fresh from the motherland’

“Ti tha pi O kosmos” (What will people say) Yeap…..that one! Good God I really dislike that expression, as in my case, it was normally followed by a Patso (slap)

So this was my childhood, sold out for a few pieces of Fish, I was approaching 7 years old at the time, these were the days of Tiswas, the Saturday Multi-Coloured Swap Shop and so on, but did I get to watch any of this on a Saturday morning after a hard week of being a horrible little bastard in school? Nope!

Now my job, was to bring the baskets of chips from out the back, every time dad poured one in to the fryer, I had to go and get another, dipping my hands in to that freezing cold water, or maybe having to tip potatoes in the chipper, depending what was needed.

As an extra special treat, I had to run out the back to get slices of Spam, when ordered for Span Fritters, or my absolute favourite, ‘Cod Roe’ REALLY? How can anyone eat that crap, it’s like wet sawdust stuck together!

Now back then, most Fish & Chip shops closed around 7.30/8.00, but once they got in to the hands of Cypriots, they were open till late, as we were. This was before the mass Fast-Food chains arrived, so there was a lot of money to be made. I remember days when the queue ran all the way round the shop, out the door and about another 20 feet in to the street! You don’t really see that today.

So my shifts were Friday evening, and Saturday lunchtime, more in the school holidays, I got paid in chips and if I raised any objections, I was soon put in my place with a healthy portion of guilt!

“You should be grateful we are doing this for you!”

That was interesting, because they were not “doing it for me” when I wanted a Raleigh Racer, no….I got some unbranded thing from Cash & Carry, in fact, nearly everything came from the Cash & Carry!

I remember in that period, there were  nearly a dozen chippy’s in Northampton owned by Cypriots and dad had a nickname for all of them, in fact……dad gave everyone a nickname and they were NOT flattering!

This was not a little book, with A-Z that pops up if you remember them, not even a notebook, no…this was a folded wrapping paper, sellotaped to the wall where the phone was and I so wish I had a copy of it. I think that it was one of the funniest examples of ‘Greeklish’ I have ever seen.

It comprised long, made-up words which may have included a variant of the person’s name, a description or maybe the company and often a nickname or even an insult thrown in…

And many, many more…………..it was hilarious. Apart from the fact, that I was just a kid, I picked up this stuff and repeated it, but guess what happened when I did? Yeap, I got slapped!

There were so many incidents in that shop, I could talk about it forever, but some of the funniest, were not so funny at the time. Duncan was married to my aunt Sue, he used to do the potatoes for a while. The shop was basically 3 rooms next to each other, the shop, the kitchen and then the potato storage and preparation area.

One day he was stood in the middle room, which was basically the kitchen and you had to pass through here, via a pair of swinging louvre doors that looked like they came out of a John Wayne movie, to get out the back to get chips. I was stood talking to Duncan, and dad walked through with two empty buckets and bumped in to me, he put them down, slapped me, picked them up and carried on.

After being slapped, I moved further along out of the way and mum was taking the pressure cooker off the gas to put it in the sink and turn the cold tap on,  she stepped back holding this hot pot, and backed in to me, she put the pot back on the gas and slapped me, on THE OTHER CHEEK!  I had one hand on each cheek, Duncan stood there laughing……..BASTARD!

Dad used to hire a transit van, I remember it was a Blue one, that looked like it had made an appearance in an episode of ‘The Sweeney’ Every Sunday, we would head off to the Fens looking for cheap Potatoes, the area around Wisbech was a potato farming heartland. The van was always overloaded, we had to drive back at 20MPH, I got bored, I played up, I got smacked…….What a fucking joke, I was supposed to be grateful for spending the whole of Sunday squashed in a van, because…..

”We do all this for you re, watsamatta, why you not grateful?”

“Grateful! REALLY? Yes of course, I totally forgot that it’s my lucky day to be son of Cypriot”

One day, this man walked in the shop and said he had a whole warehouse full of potatoes at a very special price.  I still remember the look on dad’s face when the man told him the price, I think it was around £5 a sack, but this was in 1976, so I’m not completely certain, but one thing I do remember, was dad trying to hide his elation at ‘CHEAP PATATES’ (potatoes)

Now dad has a habit of biting his tongue when he’s excited, and at that moment he shoved so much of it to the side of his mouth to have a good chew that he had a lump in his cheek! Anyway, dad had a look at a random sack of potatoes and they looked fine, so the next thing he got on the predecessor to the ‘information highway’ yes…the ‘Tilefono’ (phone)

Dad ordered two or three tons, ( I think there was about 40 sacks to an imperial ton at that time) as did all the other Cypriots in Northampton, this was a time to get the Brandy out and celebrate.

They all had their ‘Super Value Potatoes’ delivered within a few days and went back to the task of making lots of money because it was all for me.

”I thought great, now that we’re loaded I might as well nick a tenner out of the till, it won’t hurt”

Well I thought wrong didn’t I?

Mind you, what was about to come was infinitely worse! When I was bored, I used to like standing out in the back and throwing knives at the potato sacks, every now and then I would get the same one too many times and when Duncan went to pick it up to pour them in the peeler, the sack would fall apart and all the potatoes rolled around the floor, which I thought was hilarious, sometimes, I’d manage to run out the back before I got slapped, sometimes I didn’t.

On this occasion, thing were about to get much worse, I’d been knife-throwing for ages and one of the sacks actually split, while it was stacked up, these were all the cheap potatoes dad had bought the week before, they were like Organic Sex, because they were going to make dad a good profit……..or so he thought.

As this sack split, a few other sacks fell down too as they were stacked so high, to fit, I saw mum coming with the shoe, I legged it out the back door and just at that moment, it was uncle Mamas…..yeah, we all have that one uncle who is always in the wrong place at the wrong time, well that was him and this was the time.

As I ran out the back door, my mum shouted in this Pigeon English….”STOP HIM”

Yeah, Mamas was just at the right place at the right time and being so skinny, he was fast, his boney little fingers just caught my sleeve and it was like a cartoon, my legs took off and were running in the air. I got dragged back in and got a shoe across my face, but then………..CATASTROPHE!

Mum said, “What’s that smell, EKLASSSES ANTONAKI(did you fart Antony)?” It was like raw sewage, obviously they all gave me a quick sniff first, because as far as they were concerned, if anything goes wrong it is my fault, but I was actually fucking innocent this time!

They had not started on those cheap potatoes yet, until they finished off the stock they had, but the sack that split due to my knife-throwing was one of them and it STUNK!! I could not describe the look on mum and dad’s faces as they thought the worst…..they quickly opened another sack, that stunk too, and another and another.

Dad quickly got on the phone to ‘MAKROKKELOS”  he had just discovered the same thing, one by one, they all called each other and they all found out that they had been the victims of a sting! The irony is, dad was almost relieved to hear that the others had been done too, otherwise there would have been suspicion of a ‘FIX’

Good God, can you imagine the HUMILIATION?

Mum kicked off with ‘APANAYIAMOU” (My dear Virgin Mary) but then she left the pages of the good book and started cursing,

……and so on. Naturally I laughed and got another slap for my cheek, but it was worth it! I have to admit I was still pissed off about being slapped for taking that tenner, so I thought to myself, “It’s not for me anyway so bollocks!”

This guy had sold 30 or 40 tons of potatoes that were unfit to eat, they were rotten, I must admit, I did think about taking notes for the future, that was a good hit!

So much drama and this is only 1976, I was still just 10 years old……wait till I tell you about some of the other crap that has happened………..back soon!