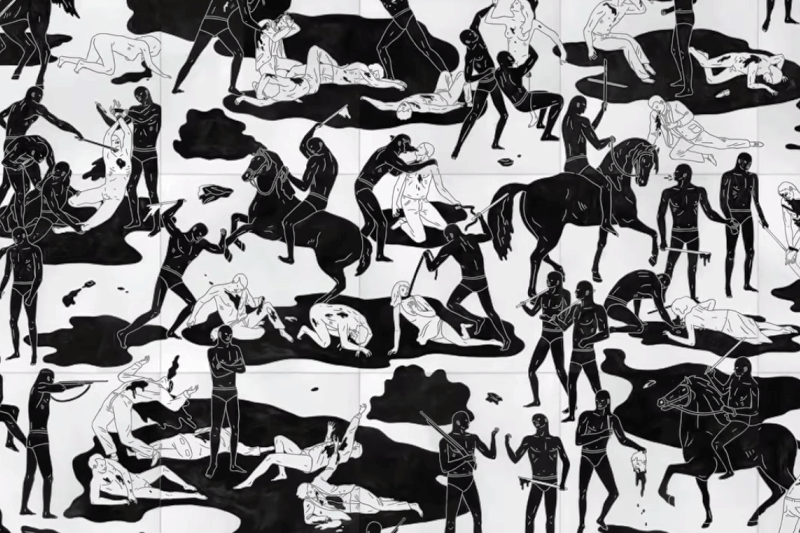 Cleon Peterson, it turns out, is a former heroin addict and three-time felon who has since become a renowned and successful artist. Now, I have absolutely nothing against former drug addicts. half our generation has been addicted to heroin and opiates. However, since getting clean and becoming an artist, Peterson’s entire career has been based off the ongoing creation of very specific drawings, all stylistically similar, all portraying horrific violence and degeneracy. It also turns out that all that violence involves black figures murdering, torturing, and raping white figures.

When it debuted, many people were outraged, and suggested the image and its title were celebrating the end of native Europeans as a result of mass-immigration and intermarriage with non-Europeans.

THE REAL MEANING Take your medicine, evil whites. There are no horrors that can be perpetrated against you too great. If you don’t like Europe becoming Muslim, your daughters being raped, terrorists beheading you, and art celebrating it paid for with your tax dollars, you’re obviously an evil racist.

These sick, disgusting criminals are getting outright brazen, and things such as this will (hopefully) serve to wake more people up. Some won’t of course- some would gladly sacrifice the lives of their own children to this sick religion they are a part of. But other’s are bound to, and will come round to our side as reality intrudes upon them.

Europe is under siege, not just by the vast numbers of immigrants, many of whom commit acts of violence just as horrific as those in these paintings, but by the sick ruling class- the 1%, the Podesta’s and Soros’s and their ilk- who are commissioning religious-fundamentalist/ethnomasochist fools like Peterson to engage in such artwork, openly celebrating the death of Europe they are effecting.