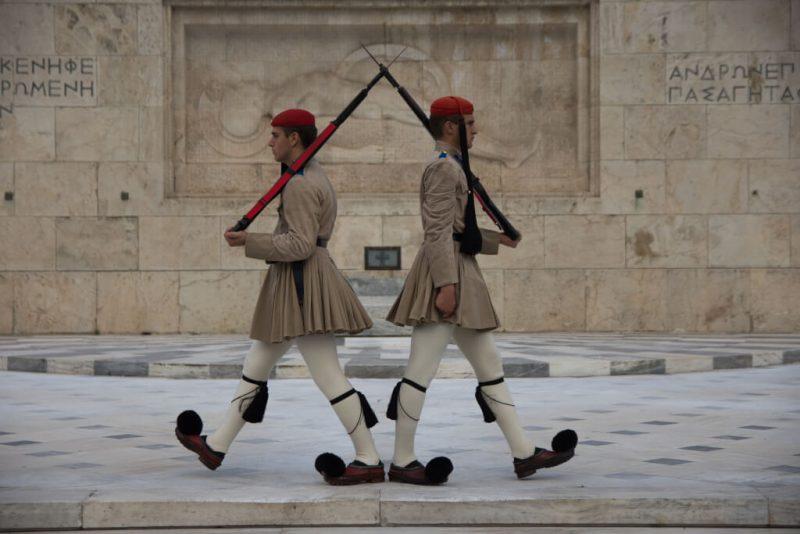 The origins of the traditional uniform that the Evzones wear are closely tied to Greek military history. In fact, the term can be traced all the way back to Homer’s time, which indicates that the Evzone soldiers were present in some capacity in Ancient Greece. Today, the Evzones take on a ceremonial role. One of their main duties is to guard the Tomb of the Unknown Soldier in Athens. In many ways, their role is a symbolic one and their uniform is the very embodiment of Greece’s military legacy. 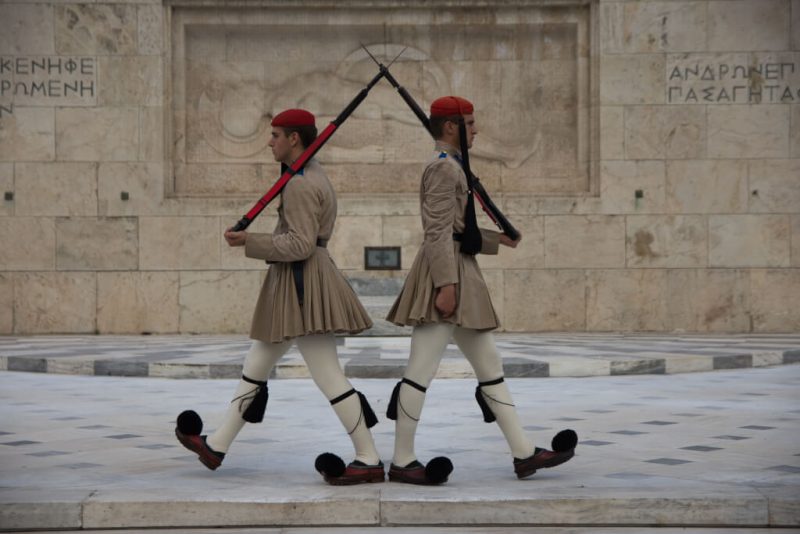 As a side note, Evzone soldiers are often referred to as Tsolias colloquially. However, the term “Tsolias” is usually reserved for members of Greece’s modern military. Though, these soldiers could take on the ceremonial duties, such as becoming a member of the Presidential Guard. In that case, they would become “Evzones” and would wear the traditional Evzone uniform.

The first mention of the word “Evzone” (or back then, the Ancient Greek term was “evzonoi”) can be traced to Homer’s Iliad and means “well-belted.”  Literally, it was a reference to an “elite man” and not necessarily a soldier of any kind. Now, the word simply refers to the soldiers whose purpose it is to guard the Tomb of the Unknown Soldier.

During the four hundred years that Greece was occupied by the Ottoman Turks, the Evzone uniform underwent some changes. The Klephts, who were the soldiers that fought against Turkish rule during the war, wore the uniform. It was during this time that the foustanella, or kilt, was added to the uniform. In today’s design, the foustanella is said to have four hundred folds, one for each year that the Turks were in Greece. This is also the time when the tsarouchia, or clogs, was added to the uniform.

After the Greek War for Independence concluded, King Otto of Bavaria became King of Greece. Though it lasted for thirty years, his reign was a turbulent one. He was never fully embraced by the Greek people, especially since he and his wife were considered outsiders. In 1833, a Bavarian-inspired Evzone uniform was introduced. It featured blue trousers, a tailcoat, and a shako, a type of military helmet. It was changed in 1837 to something that more closely resembles today’s uniform.

Today’s Evzone uniform is complicated. It has around twelve parts, and each needs to be in place. The Evzones form the Presidential Guard, a prestigious discipline for the soldiers. Their main function is to guard the Tomb of the Unknown Soldier but they also march in official parades, as well.

The uniform is highly symbolic and it can change slightly at different times of the year. In addition to the typical Evzone uniform, they could wear the traditional Cretan Evzone dress and Ponti Evzone uniform. Note that the Cretan design doesn’t include a foustanella, but rather dark blue trousers. They often wear different uniforms to honour different aspects of Greek military history.

Changing of the Guard

Every Sunday at 11:00, tourists gather in front of the Parliament building on Syntagma Square (Plateia Syntagmatos) to watch the ceremonial changing of the guard in front of the Tomb of the Unknown Soldier. The guards (Evzones) wear their traditional white kilts, red and black caps and red clogs with pompoms only that day or on special occasions. On every other day, the Evzones wear regular khaki uniforms with skirts and the changing of the guard takes place every hour on the hour, 24 hours a day. The guards are tall and well-trained soldiers. They belong to the “Proedriki Froura”, the guards of the President of Democracy. It is a high honor for every Greek soldier to be chosen as an Evzone.

Each soldier mounts guard for one hour at a stretch, 3 times every 48 hours. They work in pairs in order to perfect the coordination of their movements. Originally founded as a royal guard in 1868, this elite corps has about 120 members and enjoys much better accommodations and conditions than the typical Greek army conscript. Much seen and photographed by international tourists and local visitors alike, the ‘tall guys’ guarding the Tomb of the Unknown Soldier and the parliament (Vouli) are famous in their own right. Yet little is actually known about them.

The Evzones or Tsoliades wear the traditional and historically meaningful uniform and receive exclusive forms of training and benefits. With a history spanning over more than a century, the Greek Presidential Guard was officially founded in 1868 as a regiment of the Greek army. Today, the duties of the Evzones are of a purely ceremonial nature. The team of Evzones (meaning the ‘well-belted’, a term traced to Homer’s time) is also called the Corps, Flag Guard, Palace Guard and Royal Guard, the last two vestiges of the royal regime. Their training camp is located very near to the Parliament building and one will often see them marching ceremoniously back and forth along Vas. Sofias Avenue and Irodou Attikou Street whilst changing shifts.

Although soldiers making up this unit do not sleep at the training camp throughout the week and are said to be offered more food portions than the average soldier is, they are also expected to be on a constant alert and yet show no reaction to anything. For there are plenty of tourists who, while having their snapshot taken standing next to the motionless Evzones, quite predictably attempt to make the guards laugh or even twist. A Presidential Guard in normal uniform is always around however to prevent things from getting out of hand.

During a demonstration in front of the Parliament in 2001, a Molotov cocktail was thrown at one of the guardhouses. In no time, the wooden construction was engulfed in flames. The Evzone standing next to it didn’t even blink his eyes, let alone move, until the guard in standard uniform came and gave him the order to move. With a scorched and partly smoking uniform on one side, the Evzone did.

The Presidential Guard is naturally not involved in any fighting activities, although up to WW II, it was regarded the strongest and bravest part of the Greek army. Their uniform is a reproduction of the outfit proudly worn by guerrilla fighters during the Ottoman Occupation of Greece (1453 – 1821). Nowadays, young men doing their army duty are hand-picked for the Presidential guard according to specific categories such as height (they have to be over 1,87 meters– 6,13 feet), character, moral outlook and good health, general appearance and stamina.

Those who join the corps, first complete five and a half months of their basic military training and then receive one month of specific training as Presidential Guard, which they serve for the following five months. The notoriously tough specific training involves the development of the ability to stand still for an hour and the perfecting of their trademark synchronized ceremonial gait when changing guard.

“Of course it takes a lot of training to become an Evzone.”, says Colonel Efstathios Siamitros of the Presidential Guard. “Have you ever attempted standing completely still for five minutes? If you do, you’ll get an idea of what it may mean to do that for an entire hour.” To somewhat help the situation, their ceremonial steps are carried out in slow motion so as to protect their blood circulation following the literally motionless 60 minutes.

The Presidential guard has the following duties:

on a 24 hour bases, guarding the Tomb of the Unknown Soldier,

Sunday at the Acropolis.

accompanying the President of the Republic on official foreign visits .

The uniform is a traditional representation of Greece’s historic mountain guerrillas, the Klephts (thieves) and armatoles (bandits), which resisted the Turkish occupation and fought hard in the War

of Independence. The skirt/kilt is called a ‘fustanella’ in Greek. There are 400 pleats in it; one for each year of the Turkish occupation. The Evzones have professional steam irons in the barracks and

they have to iron them themselves. The uniforms are made by special craftsman in workshops within the barracks and take 80 days to make. Officers wear an older more elaborate form of the uniform and since the Second World War, Evzones from Crete wear blue breeches and caps with white boots.

The uniforms (there are several kinds) are all hand-made at the tailor’s department of the Presidential Guard training camp. There, some ten individuals, skilled in hand-embroidery and machine sewing, painstaking prepare the uniforms over long periods of time. The Evzones waistcoat alone takes up to one month to sew. World-famous ‘tsarouchi’ shoes are also manufactured at the camp’s shoe-making department by three to four men trained in the craft. Each tsarouchi, a leather clog with black pompoms, weighs 1,5 kilogram and has sixty nails studded into the soles so that the Evzones don’t slip.

The main parts of the Evzone uniform are:

the hat made of red baize with a silk tassel

the kilt (foustanella) made from 30 meters of white

the breeches, the long red trousers of the officers and the white woollen stockings of the Evzones

the garters, black for the Evzones and blue for the officers.

Apart from the above which are common to both Evzones and officers, there are also

the gaiters, the red boots and the 1821 sabre of the officers

the inside garter, which holds the stockings in position

the fringe (blue and white coloured braids, the colours of the Greek flag)

the “tsarouchia”, the traditional shoes of the Evzones.

Throughout their entire service, each Evzone teams up with a partner. Between them they share both training and duties. Mutual help is also appreciated when donning the uniforms, a task that can prove time-consuming. Slipping into the official uniform, for instance, may take up to half an hour. Help also comes in handy with smoothing the black tassel atop the Evzones red cap, or ‘fessi’,  straightening the collar or tying properly the two-part fustanella, the traditional 400-fold kilt. Through the hottest summer and the coldest winter, the Evzones invariably wear white woollen stockings and a leather belt with bullet holders to emphasize the waist of the ‘well-belted’ soldier. The sculpture on the Tomb the Evzones guard, shows a Greek soldier while the inscriptions scattered around the tomb quote fragments from Perikles’ Funeral Oration of 430 BC, delivered

after the first year of the Peloponnesian war to honour the fallen Athenians as well as the names of places where the Greeks have fought in different wars. It was designed by architect Emmanuel Lazaridis. In April 1929 work began and the monument was completed in March 1932. It was inaugurated on the National Holiday of the same year.