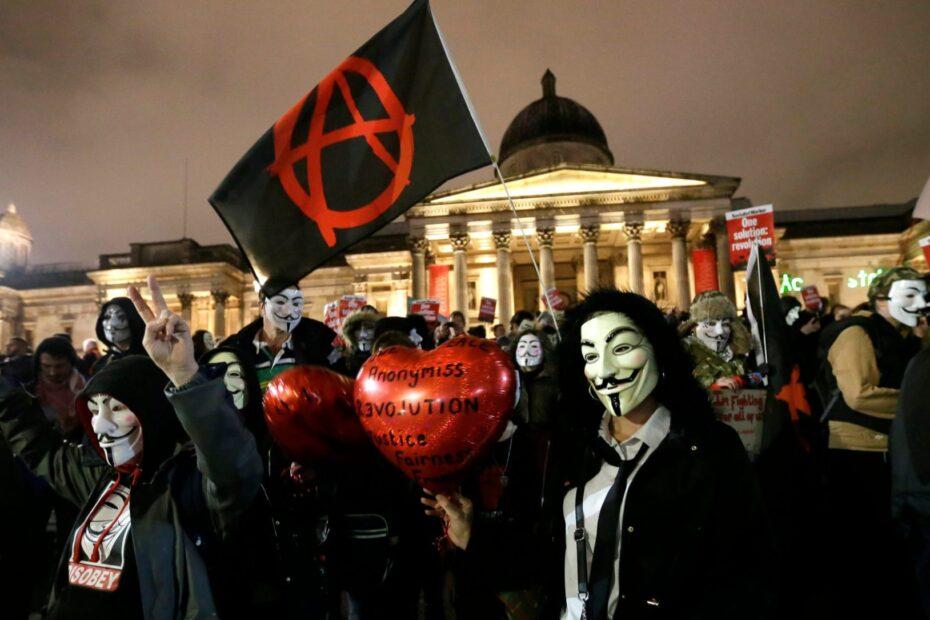 On Saturday 5th November 2016, the annual Million Mask March took place in central London. They gathered at Trafalgar Square for 17:30, then made their way down to Parliament Square.

Despite the misinformation about the lack of numbers, there were many people in attendance. I only attended for the first time last year, and that was when I realised to what degree we are lied to by the media.

Everything from the numbers attending, to the type of people who attend and even their current location and behaviour.

Yes of course there were some young people looking for a thrilling night out with some anarchy, but they are WITHOUT DOUBT a very small number.

I did not have the opportunity to speak to many people as I was running around with a camera, trying to avoid getting caught up in the middle of anything, but I did speak to some people……their reasons for attending were at the very least ADMIRABLE!

There was one group I spoke to who had travelled from SWANSEA to be there, were they there for Anarchy? No! Were they there as hooligans? No!

They were in there in fact because one of the young lady’s mother has Spina Bifida, yet they have cut her benefits, leaving her unable to keep warm or eat.

Anyone think this is NOT a reason to protest?

For those who have never attended, the media is happy to portray these young people as ‘ANARCHISTS’ however, after attending and speaking to many of the people there, they are just angry young people, frustrated with modern society.

As I followed the march around, I noticed that the police had several officers out armed with  video recording equipment, they were ensuring that they had EVERYONE on camera. Later in the evening, they insisted that everyone wearing a mask, took it off so they could film them, those who did not comply, were threatened with arrest.

While this may seem a legitimate request to target anarchists, those were actually few and far between  and not only that, they were arrested and therefore, the police would know EXACTLY who they were. No, this video surveillance is for a far more sinister purpose, it ensures that any emerging political threat can be monitored in advance!

Agree or disagree, they have and should ALWAYS have the right to voice their concerns, we may not be aware of it, but they represent the last bastion of resistance to the forthcoming totalitarian state!

There is a war on for your mind!