The Great Library of Alexandria 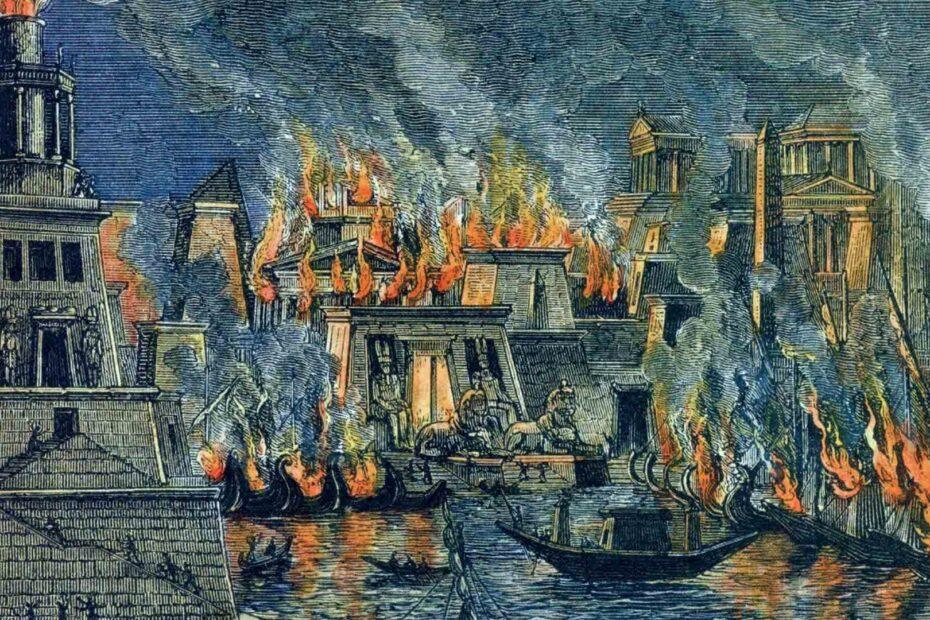 The very name of the Bibliotheca Alexandrina conjures up the image of a glorious past, of a shared heritage, not just between Greece and Egypt, nor even of the whole Mediterranean, but a shared heritage for all of humanity.  For it was indeed at the Ancient Library of Alexandria that the greatest adventure of the human intellect was to unfold.

2300 years ago, Alexander the Great, Aristotle’s pupil, brought his dream of culture and conquest, of uniting the world and launching a new era to the timeless land of Egypt.  Alexander selected the site for a new capital:  Alexandria.   His successors in Egypt, the Ptolemies, built Alexandria, and made it the intellectual capital of the world.   Its lighthouse, the Pharos, was considered one of the seven wonders of the ancient world.  But a greater legacy was the Ancient Library of Alexandria.   Launched in 288 BC by Ptolemy I (Soter) under the guidance of Demetrius of Phaleron, the temple to the muses, or Mouseion (in greek), or museum (in latin) was part academy, part research center, and part library.  The great thinkers of the age, scientists, mathematicians, poets from all civilizations came to study and exchange ideas.

As many as 700,000 scrolls, the equivalent of more than 100,000 modern printed books, filled the shelves.  The library was open to scholars from all cultures.  Girls and boys studied regularly at the Ancient Library.   On this very spot:

And the list of great names and great achievements goes on and on… Diophantes, Appolonius of Perga, Heron and visiting scholars such as Archimedes… They and many others were all members of that amazing community of scholars, which mapped the heavens, organized the calendar, established the foundations of science and pushed the boundaries of our knowledge. They opened up the cultures of the world, established a true dialogue of civilizations.  Indeed, it was at the ancient Library of Alexandria that 72 specialists first translated The Old Testament from Hebrew into Greek (the famous Septuagint).  Together these scholars promoted rationality, tolerance and understanding and organized universal knowledge.   For over six centuries the ancient Library of Alexandria epitomized the zenith of learning, as later scholars, such Claudius Ptolemy and Dioscoredes built on that explosion of knowledge and added their contributions.

To this day it symbolizes the noblest aspirations of the human mind, global ecumenism, and the greatest achievements of the intellect.  The library completely disappeared over sixteen hundred years ago… but it continues to inspire scientists and scholars everywhere.

The Library disappeared slowly, suffering a slow decline from the time of Caesar and Cleopatra. Indeed, the first disaster was in 48 B.C., when the part of the library located at the harbor was accidentally set afire during the Alexandrian war of Julius Caesar. However, Marc Anthony gave Cleopatra the 200,000 scrolls of Pergamon, to make up for the losses.  Yet, subsequent upheavals within the Roman Empire resulted in the gradual neglect and ultimate destruction of the library.  Roman armies came to Alexandria to “restore order several times between 200 and 300 AD, and it was on one of those occasions, (probably the campaign of Aurelius in 272 AD) that the entire royal quarter and the original Museum were destroyed.   Christianity was brought to Africa through Alexandria by St. Marc in the first century AD, and it was followed by merciless and brutal persecution of the Christians by the Romans in the first three centuries.  Persecution ceased with the conversion of Constantine the Great, but schisms erupted in the church.  Tensions were running high and tolerant church fathers such Clement of Alexandria had to eave the city and his disciple Origen suffered much for his views.  In 391 AD Emperor Theodosius issued a decree banning all religions other than Christianity and Christian Groups under Bishop Theophilus burnt the Serapeum in 391 AD.  This was the end of the ancient library as a public institution.

What remained were the scholars in an uneasy co-existence with an increasingly militant Christian mob.  Tragedy struck in 415 AD.  Hypatia, daughter of Theon, last recorded scholar in Alexandria, herself the first woman in mathematics and astronomy, a neo-Platonist philosopher and charismatic orator, was brutally murdered by the mob in 415 AD. She became the first martyr to science.

Thus by 400 A.D. the Library had vanished, and the era of Alexandrian scholarship came to an end a few years later.  It had thus disappeared over two centuries before the arrival of the Muslim Arab armies in 641 AD.

But the memory of the ancient Library of Alexandria lived on.  It continued to inspire scholars and humanists everywhere.  Many dreamt of one day reviving the great Library…

With respect to our Sunni brothers and Sisters, the fact that the Caliph Umar has ordered the burning of The library of Alexandria is a historic fact that can’t be denied. Even if you can convince some westerners that the story is nothing but an anti-Islamic propaganda, the reality is that the original sources of the story are Sunni Muslims…

The Sunni sources (including the well-known scholar Ibn Kuldoon ابن خلدون في تاريخه) mentioned the story…Here is the details:

It is worth mentioning that Umar has also ordered the burning of other libraries in other countries. Moreover, Salah Aldin did similar things in

Here are some of the other sources:

-Abd-Al-Latif of Baghdad (عبد اللطيف البغدادى المتوفى سنه629هجريه 1230م) visited Egypt in the latter part of the sixth century AH (Islamic Calendar). He mentions that a library, which was in Alexandria, was burned by Umru ibn al-As in compliance to Omar’s orders. Second, Jamal Ad-din Al-Kufti, who was born in Kuft in upper Egypt in 565 AH, and died in 646, informs us that the library was burned by Umru Ibn Al-As .