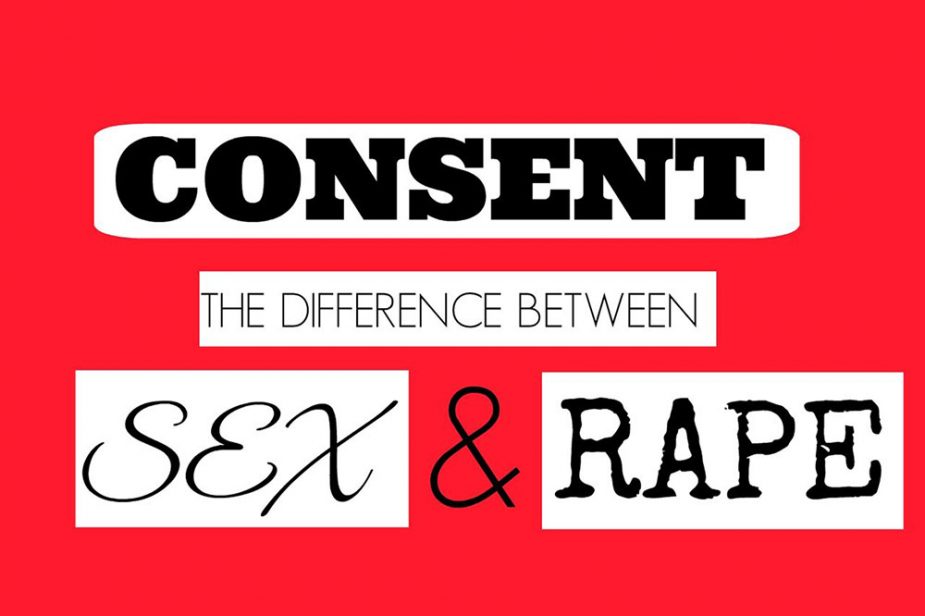 What is Sexual Consent?

Consent must be given

How do you know if a person consents? It’s simple. Ask them.

Gaining and giving consent verbally should be part of the ongoing communication between you and your partner. Importantly, just because a person has consented to some things, does not mean they have consented to others. For example, your partner may feel comfortable with kissing or touching each other’s genitals, but this does not mean they consent to oral sex or penetrative sex. Before carrying out a sexual act, ask your partner for permission. Say something along the lines of ‘Is it okay if I touch you here?’, ‘Can I go down on you?’ or ‘Do you want to have sex?’, and wait for their response. It should be enthusiastic! If it isn’t, then think carefully about if your partner really does consent, and if there is any doubt in your mind, don’t do it. Reassure them that it’s important to you that they want it as much as you, and if they say no, you must respect that. The same applies if there is something you’d like your partner to do to you, never try to physically or verbally force your partner to perform a sex act they don’t want to do.

Look for continuous verbal and body language signs that your partner is enjoying what is happening and wants it to continue. If these are not obvious then again, ask them! Use questions such as ‘are you ok?’ and ‘do you like that?’ to check in with your partner, and again look for enthusiasm! Consent can be withdrawn at any time so if your partner decides they don’t want to continue, you must stop immediately.

In the absence of verbal consent, a person can of course consent to a sexual activity by actively and enthusiastically participating in it, but that is the key: active and enthusiastic participation! This is implied consent and is open to misinterpretation and ambiguity. The only way to know beyond any reasonable doubt that your partner consents is to ask them. If at any point your partner becomes hesitant, uncomfortable or unsure, you must stop what you’re doing.

No one is ever obliged to have any kind of sex with someone, even with a partner or someone they’re married to, or someone they’ve had sex with once before or a hundred times before. Consent can never be assumed regardless of what they’re wearing or if they have been drinking alcohol or using drugs or if you have bought them dinner or drinks all night. Sex is never owed to anyone.

THE LAW ON SEX

THE AGE OF CONSENT FOR SEX

It is an offence for anyone to have any sexual activity with a person under the age of 16. However, Home Office guidance is clear that there is no intention to prosecute teenagers under the age of 16 where both mutually agree and where they are of a similar age.

The Sexual Offences Act 2003 provides specific legal protection for children aged 12 and under who cannot legally give their consent to any form of sexual activity. There is a maximum sentence of life imprisonment for rape, assault by penetration, and causing or inciting a child to engage in sexual activity.

CONTRACEPTION AND UNDER 16S

Health professionals in the UK may provide contraceptive advice and treatment to young people under 16 if, in their clinical judgement, they believe it is in the young person’s best medical interests and the young person is able to give what is considered to be informed consent.

The various sexual offences laws in force in the UK do not affect the ability of professionals to provide confidential sexual health advice, information or treatment. Each specifically states that it is not an offence provide information, advice and/or treatment if it is in order to protect the young person’s sexual health, physical safety or emotional wellbeing.

In each UK country, a man would commit rape if he intentionally penetrates with his penis the vagina, mouth or anus of another person, male or female, without that person’s consent or if they are under 13, as young people aged 12 and under are not legally able to give consent to any sexual activity.

This particular sexual offence can only be committed by a man. A woman cannot be charged with the offence of rape as this is defined as penile penetration, but she could be charged with another offence such as causing a person to engage in sexual activity without consent, sexual coercion or assault, or assault by penetration. These offences may not all apply in each different UK country.

This offence was introduced by the Sexual Offences Act 2003 (in England and Wales), The Sexual Offences (Northern Ireland) Order 2008, and the Sexual Offences (Scotland) Act 2009. It is an offence for someone, male or female, intentionally to penetrate the vagina or anus of another person with a part of their body or anything else, without their consent. The purpose also has to be sexual.

Practitioners who legitimately conduct intimate searches or medical examinations are excluded from this offence.

In England and Wales it is an offence to touch someone else with sexual intent if the other person has not consented to such touching and if the person carrying out the offence does not reasonably believe that the other person consented.

In Northern Ireland it is an offence (sexual assault) for a person intentionally to touch sexually another person without reasonable belief that they consented. Touching covers all physical contact, whether with a part of the body or anything else, or through clothing

In Scotland the range of sexual assault offences relating to ‘sexual touching’ is similar, with the addition of sexual penetration of the vagina, anus or mouth; ejaculating semen onto someone; spitting or urinating onto them. There is some overlap with the offences of rape and sexual assault by penetration. There is also a common law offence of assault in Scotland, which has a wider application.

‘… [would] right-minded persons …consider the conduct indecent or not’

‘… [was] what occurred … so offensive to contemporary standards of modesty and privacy as to be indecent’.

The person must also have intended to indecently assault.

It is an offence for someone to expose their genitals if they intend that someone else will see them and if they intend to cause that person (or persons) ‘alarm or distress’.

It is not a crime to be naked in public but it is possible that a naked person could be arrested and charged with causing harassment, alarm or distress under the Public Order Act 1986 if they do not put some clothes on when a member of the public or a police officer asks them to do so.

It is an offence to befriend a child on the internet or by other online means and meet or intend to meet the child with the intention of abusing them. A Risk of Sexual Harm Order can be imposed on adults in order to prevent them from engaging in inappropriate sexual behaviour such as having sexual conversations with children online. The police can apply for such orders if they believe that someone poses a risk to young people under 16.

PORNOGRAPHY AND IMAGES OF CHILD ABUSE

In England and Wales, there is no standard legal definition of the term ‘pornography’. However, legal guidance from the Crown Prosecution Service  says that an image is pornographic if it can be reasonably assumed that it was produced solely or principally for the purpose of sexual arousal. Pornography is legal as long as those who appear in it are aged 18 or over and as long as it does not contain anything defined as extreme pornographic imagery (see below).

A judge or jury determines whether an image is pornographic or not simply by looking at the image. The Criminal Justice and Immigration Act 2008 (England, Northern Ireland and Wales) made it an offence to possess an extreme pornographic image. An extreme image is defined in the Act as one which is ‘grossly offensive, disgusting or otherwise of an obscene character’ and if it portrays in an explicit and realistic way any of the following:

In Scotland, extreme pornography is defined by the Criminal Justice and Licensing (Scotland) Act 2010. The definition is similar to that in England, Wales and Northern Ireland but also includes “an act which takes or threatens a person’s life” and “rape or other non-consensual penetrative activity”.

The law covers images whether they are moving or still images.

The Audiovisual Media Services Regulations 2014 introduced new legislation covering pornography made and distributed in the UK through video on demand and streaming services. This type of pornography must only show material which would meet the criteria for an R18 certificate under British Board of Film Classification guidelines. If the material has received, or would be expected to receive, an R18 rating it can only be distributed if steps are taken to ensure people under 18 will not normally see or hear it.

The Protection of Children Act 1978 with the Criminal Justice Act 1988 make it an offence for anyone to take, allow to be taken, possess, show, distribute or publish any indecent image of a child. A child is defined as anyone aged under 18 for the purposes of these Acts.

The Sexual Offences Act 2003 for England and Wales says that a person consents to something if that person ‘agrees by choice and has the freedom and capacity to make that choice’.

Northern Ireland defines consent as a person having the capacity to make a choice.

Scotland: ‘free agreement’. An offence will have taken place if the victim did not consent, or the accused had no reasonable belief that they consented.

The laws of each UK country also allow for a range of circumstances which may affect a person’s capacity to freely consent, such as when they are asleep or have been subject to threats or violence.

Alcohol has always been considered to be a ‘Social Lubricant’ which often makes people lose their inhibitions and feel a little more brave than they would otherwise be, however on the matter of sexual consent, there is a real question mark here.

How can a person consent to sex, when they are unable to think coherently?

Therefore, it is becoming increasingly important that people finding themselves in an intimate situation are AWARE of their obligation to ensure the other person fully understands what they are doing. With certain precedents set in courtrooms in the UK and the USA, amongst other countries in recent years, ignorance of the law is no defence, the other party not saying “NO” is not a defence, if they were not in a state of mind to make a rational decision.

We need to address this issue in an informative manner, not one of hostility, misandry or pre-judgement, so that it becomes second nature to all, that not only “No means No!” but also that inability to say yes, also means “No!”