Why exploiting Greta Thunberg was disgraceful This week, the UN climate conference was hijacked by a 16 year old Swedish girl, Greta Thunberg, who made a passionate speech, that was obviously scripted by her supervisor, who works for one.org, an organisation that is funded by George soros, amongst others. The people behind this mass hysteria are manipulating the youth en mass, in to a frenzy of fear that the end of the world is coming. There is even a new buzz-word for this, it is called ‘Eco-anziety’

without a carefully rehearsed script to work from, Greta doesn’t really have a lot to say, as can be seen in the video below, where she is asked a simple question by a reporter, but after glancing at her supervisor for help, Greta suggested that the reporter ask other people.

The response to any questioning of this carefully staged insult, is one of ‘conspiracy’ or the fact that Greta has Asperger’s, means that questioning the cynical reasons for her performance. The world’s media and the sheep all over social media have been busy attacking anyone who can see through this pre-meditated insult, by accusing them of attacking an innocent child.

Greta is not to blame here, she is just a child, but she is a child who has been brainwashed, terrified and is being exploited by the people behind her, to nurture a culture of hate by the young, for the old.

In fact, the degree of passion, fear and hate that is being cultivated in people like Greta is very reminiscent of the ‘Hitler Youth’  Where will this end, will this next generation happily support the punishment of the older generation? Will they support going to any lengths to ‘save the planet’ that is about to end, by turning a blind eye to the so called solution that the instigators of this media show reveal in good time.

There are many sources of unbiased facts to refute this scaremongering campaign, but as expected, most of the dedicated scientists who have evidence that we are being lied to are kept out of the lime light, discredited or ridiculed.

Here is a chart with the historical trends of average global temperature and the atmospheric concentration of CO2. Correlation? The idea that CO2 is the regulator of Earth’s temperature is counterfactual, yet the narrative that human emissions of CO2 will produce a climate disaster is routinely drummed into our children. 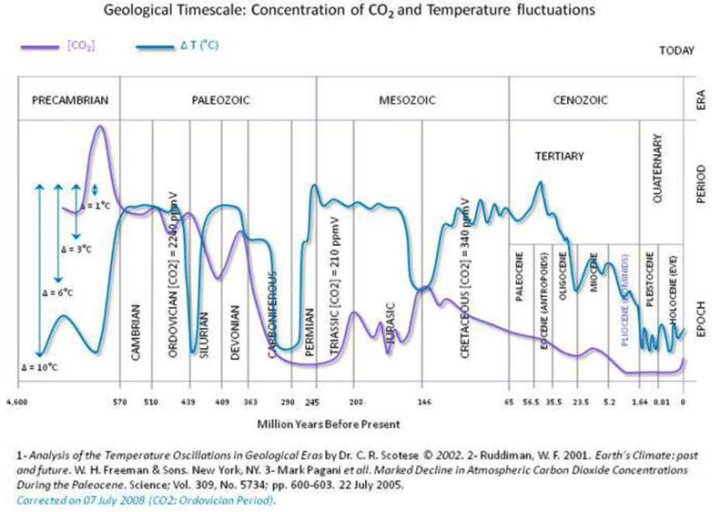 Greta Thunberg has been indoctrinated with climate alarmism, and so have American students. The National Environmental Education Act of 1990 mandated that our public schools’ environmental curriculum be cleared through the Office for Environmental Education at the EPA. This means that warnings of global warming have been pounded into our kids for many years. There is even a famous recording of Al Gore telling children a decade ago to pay attention to what their schools teach them about climate change, because schools have the latest “scientific” information and their parents don’t.

What we know with certainty is this: 1) It is impossible to predict the climate (the U.N.’s Inter-governmental Panel on Climate Change correctly stated this) and 2) Natural disasters and horrific weather events are unavoidable, but the more prosperous human societies become, the better able we are to cope with and survive nature’s fury, and that is good news indeed.