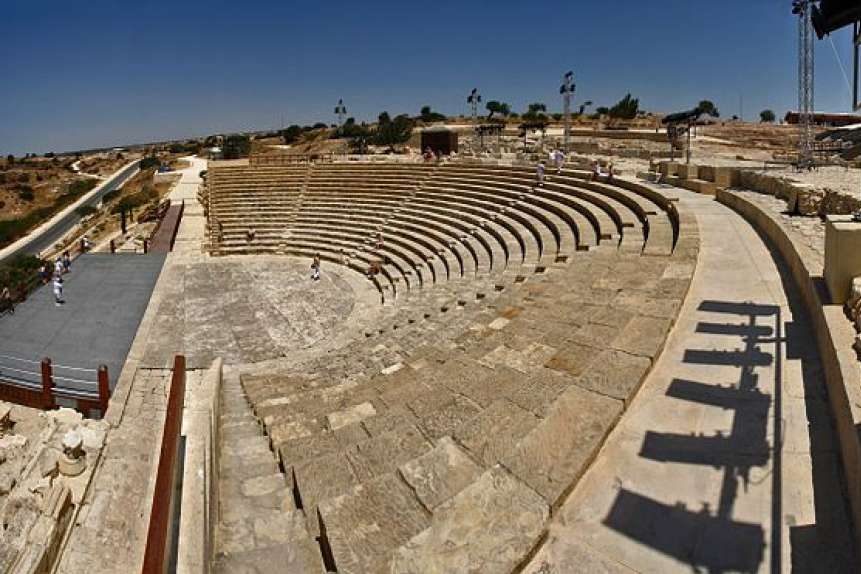 Few tombs of Roman date from the Kourion area have been published in detail. Both of the main types, chamber tombs with long entrance passages and simpler pit graves from the earth or bedrock, continued earlier Hellenistic types represented elsewhere on Cyprus at Amathus and Paphos (where numerous burials of this period have been discovered in recent years) but also from older excavations at Kontoura Trachonia, Tsambres and Apehendrika in the Karpas peninsula.[105] There is also much evidence to suggest that many older Hellenistic funeral vaults were commonly reused, often by the addition of new niches or side-chambers (loculi) though this is not always clear from the descriptions of the British Museum-excavated tombs.
As before, in chamber tombs the deceased were laid out on the floor of the chamber or loculus, sometimes on benches with headrests or within sarcophagi (stone coffins). Coffins were also made of clay or wood and often do not survive, especially from older excavations. Niches with arched roofs (called arcosolia) and in-built sarcophagi, which were cut into the walls of tomb chambers, became very common in the Roman period and especially around the Kourion area. As the accompanying pictures of the Amathus Gate and Akrotiri cemeteries show, these are sometimes the only parts of the tomb that have survived millennia of man-made and natural destruction. In addition, many tombs were provided with cylindrical tombstones (known as cippi), usually inscribed with just the name of the deceased and a simple farewell.
Tomb 113 of the British Museum excavations consisted of a large rectangular chamber 5.2 x 1.5m and 1.13m wide approached by a stepped passageway. Two large recesses between 2.1m and 2.4m long opened from the back wall, while smaller niches led off the side of the chamber. Both of these side-chambers contained a sarcophagus, though one also had a lead urn full of cremated bone. The finds recorded by Walters date the tomb to the 1st or 2nd century AD: many glass bottles and other vessels, decorated lamps, bronze coins, several spindle whorls, and a bronze mirror and spatula. An inscription cut above one of the stone coffins in the right-hand recess is an epitaph in Greek to Metrodoros son of Metonos.
Although rather neglected by earlier excavators and many modern scholars, simpler tombs for small numbers of burials, with little or no architectural elaboration, were also very common in Roman times, as they had been for centuries before. They are commonly called mneimata (the plural of mnema) in the scholarly literature, and the term is often used in Walters’ notebook of his excavations at Kourion in 1895.
These mneimata are essentially rectangular pits cut in the earth or rock for a small number of interments, similar in many respects to modern Western graves. Earth graves were sometimes lined or covered with stone slabs or tiles, while rock-excavated examples often show refinements such as carefully cut sides or ledges for a covering slab. Despite their simpler form, some of these graves show signs of wealth and are sometimes placed in the same cemetery plots as chamber tombs. Both adults (men and women) and children were interred in surface graves. From this it follows that they were not necessarily the burial places of the poor, or predominantly late in date, as was once commonly argued.
At the same time, changes in burial practices are visible at Kourion over time. The cremation burial in Tomb 113 just mentioned, though never very common, is one sign of a shift away from exclusive use of inhumation. The older Hellenistic and early Roman chamber tombs below the Amathus Gate of the city appear to have been abandoned, after which the area was extensively quarried. From the 4th century AD, single burials were commonly placed in stone cists covered with large slabs in the same area as the older chambers. These graves were connected to the surface by small pipes to allow libations to be offered to the dead after the sealing of the tomb. This practice, as well as the offering of grave goods, apparently continued for a time after the advent of Christianity.
0 0 votes
Article Rating