The Scourge of Ritalin 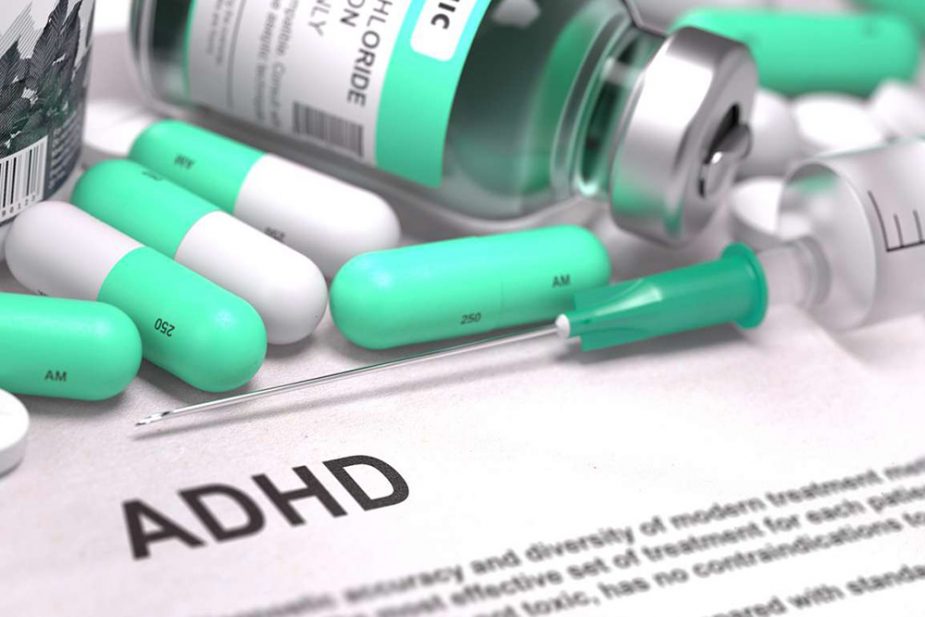 What Is Attention Deficit Hyperactivity Disorder?

Attention deficit hyperactivity disorder (ADHD) affects children and teens and can continue into adulthood. ADHD is the most commonly diagnosed mental disorder of children. Children with ADHD may be hyperactive and unable control their impulses. Or they may have trouble paying attention. These behaviours interfere with school and home life.

It’s more common in boys than in girls. It’s usually discovered during the early school years, when a child begins to have problems paying attention. Adults with ADHD may have trouble managing time, being organised, setting goals, and holding down a job. They may also have problems with relationships, self-esteem, and addiction.

Symptoms are grouped into three categories:

Inattention. A child with ADHD:

Effects of Ritalin on the Body

Ritalin is one of the common treatment options used for attention-deficit hyperactivity disorder (ADHD). Although this stimulant can improve symptoms of ADHD, because of the way it works, it can also cause some side effects. Unfortunately, Ritalin can also be misused, and that comes with the risk of more serious side effects throughout the body. When you first start taking Ritalin for ADHD, the side effects are usually temporary. See your doctor if any symptoms worsen or last beyond a few days.

Ritalin is one of the common treatment options used for attention-deficit hyperactivity disorder (ADHD).

Although this stimulant can improve symptoms of ADHD, because of the way it works, it can also cause some side effects. Unfortunately, Ritalin can also be misused, and that comes with the risk of more serious side effects throughout the body. When you first start taking Ritalin for ADHD, the side effects are usually temporary. See your doctor if any symptoms worsen or last beyond a few days. 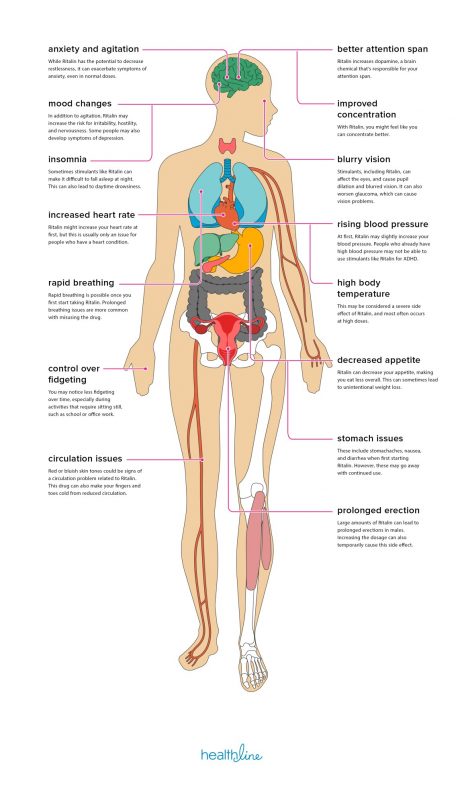 The effects of Ritalin on the body

Ritalin (methylphenidate) is a nervous system stimulant that’s commonly used to treat attention-deficit hyperactivity disorder (ADHD) in adults and children. It’s a brand-name prescription medication that targets dopamine and norepinephrine in the brain to reduce common ADHD symptoms. Though Ritalin is a stimulant, when used in ADHD treatment, it may help with concentration, fidgeting, attention, and listening skills.

According to the U.S. Centers for Disease Control and Prevention, about 6.1 million U.S. children ages 2-17 (or 9.4 percent of children) were diagnosed with ADHD as of 2016. Ritalin is just one form of treatment for ADHD. It’s often complemented with behavioral therapy. Ritalin is sometimes used to treat narcolepsy, a sleep disorder.

As with all stimulants, this medication is a federally controlled substance. Unfortunately, it can be misused, which comes with the risk of serious side effects. Ritalin should only be used with medical supervision. Your doctor will likely see you every few months to make sure the medication is working as it should.

Even if you take Ritalin correctly and don’t misuse it, it can carry the risk for side effects.

Ritalin influences both dopamine and norepinephrine activity in your brain. Dopamine is a neurotransmitter that affects pleasure, movement, and attention span. Norepinephrine is a stimulant. Ritalin increases the action of these neurotransmitters by blocking their reabsorption into your brain’s neurons. The levels of these chemicals increase slowly, so your doctor will start you on the lowest possible dose and increase it in small increments, if necessary.

Ritalin may make it easier for you to concentrate, be less fidgety, and gain control of your actions. You may also find it easier to listen and focus at your job or in school. If you’re already prone to anxiety or agitation, or have an existing psychotic disorder, Ritalin may worsen these symptoms.

Some people taking Ritalin experience blurred vision or other changes to eyesight. Other potential side effects include:

This medication can temporarily slow a child’s growth, especially in the first two years of taking it. That’s why your doctor will keep an eye on your child’s height. Your doctor may suggest a ‘drug holiday’ (often done during the summer), which is when the drug is temporarily stopped. This can encourage growth, and also allows your child’s doctor to see how they do without taking the drug. Ritalin, like other central nervous system stimulants, may be habit-forming. If you take a large dose, the quick rise in dopamine can produce a temporary feeling of euphoria.

If you have a history of seizures, this medication may cause more seizures.

Taking Ritalin in high doses or for a long time can be habit-forming. If you stop taking it abruptly, you may experience withdrawal. Symptoms of withdrawal include sleep problems, fatigue, and depression. It’s better to taper off slowly and under a doctor’s care. When misused, stimulants like Ritalin can cause feelings of paranoia and hostility.

Very high doses can lead to:

Ritalin can cause circulation problems. Your fingers and toes may feel cold and painful, and your skin may turn blue or red. Use of Ritalin is linked to peripheral vascular disease, including Raynaud’s disease. If you take Ritalin and experience circulatory  problems, tell your doctor. Stimulants can also raise your body temperature, blood pressure, and heart rate. You may feel jittery and irritable. That’s usually not a problem in the short term, but you should have regular exams to check your heart rate and blood pressure.

Stimulants should be taken with caution if you have pre-existing blood pressure or heart problems. Ritalin may increase your risk of heart attack and stroke. Rare cases of sudden death have occurred in people who have structural heart abnormalities. Misusing stimulants by crushing pills and injecting them can lead to blocked blood vessels. An overdose can lead to dangerously high blood pressure or irregular heartbeat. High doses can also lead to life-threatening complications such as heart failure, seizures, and significantly high body temperature.

The use of Ritalin has increased dramatically over the last 2 or 3 decades, but what is the reason behind this? An increasing number of Doctors as speaking out and there is information about the effects of this vile drug everywhere, yet the medical profession continues to prescribe it to children, despite the HORRENDOUS side effects.

Firstly the finger of suspicion points to the Pharmaceuticals, who have a vested interest in profiting from the massive revenue generated by the increasing sales of this drug. The Doctors who prescribe it are also doing so for profit, they are rewarded financially by the Pharmaceuticals for forcing this rubbish on innocent children.

It is also worth noting that the number of children diagnosed as being ADHD has also been increasing year on year, has this happened spontaneously and for now reason? No……..I beg to differ!

“The Nanny-State has turned in to the wicked Step-Mother!”

Education has been turned in to ‘MIND-NUMBING IN-INDOCTRINATION’ and all those who do not fit in to the tunnel visioned narrative are soon found to be ‘troubled’ in some way, just because they are unable to be DUMBED-DOWN SHEEP! I would be more inclined to blame society for it’s total failure in understanding these children, for failing to see the narrative of the ‘Nanny-State’ and the climate of cultural Marxism that is intolerant of the individual, the free thinker, or the square peg.