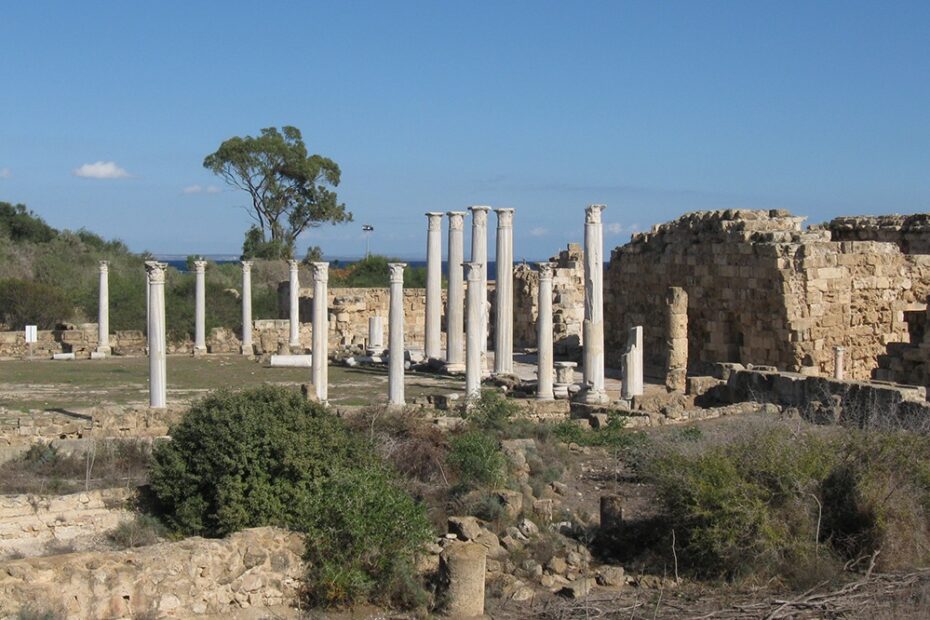 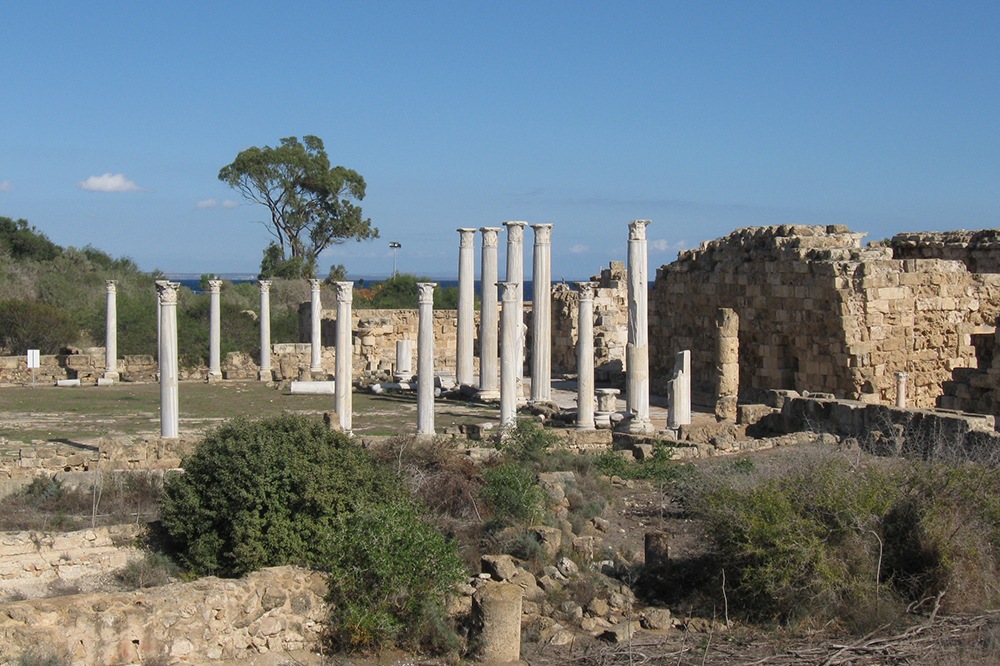 Salamis (Ancient Greek: Σαλαμίς, Greek: Σαλαμίνα) is an ancient Greek city-state on the east coast of Cyprus, at the mouth of the river Pedieos, 6 km north of modern Famagusta. According to tradition, the founder of Salamis was Teucer, son of Telamon, who could not return home after the Trojan war because he had failed to avenge his brother Ajax.

The earliest archaeological finds go back to the eleventh century BC (Late Bronze Age III). The copper ores of Cyprus made the island an essential node in the earliest trade networks, and Cyprus was a source of the orientalizing cultural traits of mainland Greece at the end of the Greek Dark Ages, hypothesized by Walter Burkert in 1992. Children’s burials in Canaanite jars indicate a Phoenician presence. A harbour and a cemetery from this period have been excavated. The town is mentioned in Assyrian inscriptions as one of the kingdoms of Iadnana (Cyprus). In 877 BC, an Assyrian army reached the Mediterranean shores for the first time. In 708 BC, the city-kings of Cyprus paid homage to Sargon II of Assyria (Burkert). The first coins were minted in the 6th century BC, following Persian prototypes.

Dating from the time of Augustus (31 BC to AD 14), the theatre once held 15,000 spectators. Much of it was destroyed by earthquakes, leaving stone raiders to seize its blocks for building projects elsewhere. Since then, it has been partially restored and occasionally hosts outdoor events.

Cyprus was under the control of the Assyrians at this time but the city-states of the island enjoyed a relative independence as long as they paid their tribute to the Assyrian king. This allowed the kings of the various cities to accumulate wealth and power. Certain burial customs observed in the “royal tombs” of Salamis relate directly to Homeric rites, such as the sacrifice of horses in honor of the dead and the offering of jars of olive oil. Some scholars have interpreted this phenomenon as the result of influence of the Homeric Epics in Cyprus. Most of the grave goods come from the Levant or Egypt.

According to the foundation myth, the founder of Salamis is said to be Teucer, son of Telamon, who could not return home after the Trojan war because he had failed to avenge his brother Ajax. There is however some evidence that the area had been occupied long before the alleged arrival of Mycenaeans (at Enkomi) and the town of Salamis was developed as a replacement when Engkomi was isolated from the sea. There is otherwise little direct evidence to support the foundation myth.

South of the theatre, the villa was originally a two-storey structure made up of a reception hall and an inner courtyard with columned portico. The villa was utilised long after the city was finally abandoned and used as an olive-oil mill. The grinding stone can still be seen today.

The vast remains of this 4th-century basilica are an entrancing spot with lonely columns backed by the sea. Originally it would have been an impressive church with three apses. In the complex behind the church (believed to have contained a bathhouse) there is an intricate, well-preserved mosaic floor.

Once the largest basilica in Cyprus, this church was built during the episcopacy of Epifanios (AD 386–403) and completely destroyed during Arab raids in the 7th century.

At the southern end of the site you come to the Roman-era reservoir, which stored the water brought to Salamis by a 50km aqueduct.

Just behind the reservoir are the sparse remains of Agora – the city’s place of assembly during the Roman era – and the Temple of Zeus which the Romans built over an earlier Hellenistic temple. Not much remains from either complex, the stones having long been pilfered for other building projects.

In the Greek period

In the 11th century BC, the town was confined to a rather small area around the harbour but soon expanded westwards to occupy the area, which today is covered by forest. The cemetery of Salamis covers a large area from the western limits of the forest to the Monastery of St. Barnabas to the west, to the outskirts of the village of Ayios Serghios to the north, and to the outskirts of Enkomi village to the south. It contains tombs dating from the 9th century BC down to the Early Christian period. The earlier tombs are within the forest area, near the boundary of the early town.

Though Salamis maintained direct links with the Near East during the 8th and 7th centuries BC, there were bonds with the Aegean as well. One royal tomb contained a large amount of Greek Geometric pottery and this has been explained as the dowry of a Greek princess who married into the royal family of Salamis. Greek pottery was also found in tombs of ordinary citizens. At this time the Greeks were embarking on an eastward expansion by founding colonies in Asia Minor and Syria; Salamis must have served as an intermediate station; it has even been suggested that Cypriots helped the Greeks in their venture.

The history of Salamis during the early Archaic and Classical periods is reflected in the narrations of the Greek historian Herodotus and the much later speeches of the Greek orator Isocrates. Salamis was afterwards besieged and conquered by Artaxerxes III. Under King Evagoras (411-374 BC) Greek culture and art flourished in the city and it would be interesting one day when the spade of the archaeologist uncovers public buildings of this period. A monument, which illustrates the end of the Classical period in Salamis, is the tumulus, which covered the cenotaph of Nicocreon, one of the last kings of Salamis, who perished in 311 BC. On its monumental platform were found several clay heads, some of which are portraits, perhaps of members of the royal family who were honoured after their death on the pyre.

Marguerite Yon (archaeologist) claims that “Literary texts and inscriptions suggest that by the Classical period, Kition [in present-day Larnaca] was one of the principal local powers, along with its neighbor Salamis.”

Alexander the Great and the Roman Empire

After Alexander the Great conquered the Persian Empire, Ptolemy I of Egypt ruled the island of Cyprus. He forced Nicocreon, who had been the Ptolemaic governor of the island, to commit suicide in 311 BC, because he did not trust him any more. In his place came king Menelaus, who was the brother of the first Ptolemy. Nicocreon is supposed to be buried in one of the big tumuli near Enkomi. Salamis remained the seat of the governor.

In 306 BC, Salamis was the site of a naval battle between the fleets of Demetrius I of Macedon and Ptolemy I of Egypt. Demetrius won the battle and captured the island.

In Roman times, Salamis was part of the Roman province of Cilicia. The seat of the governor was relocated to Paphos. The town suffered heavily during the Jewish rising of AD 116–117. Although Salamis ceased to be the capital of Cyprus from the Hellenistic period onwards when it was replaced by Paphos, its wealth and importance did not diminish. The city was particularly favoured by the Roman emperors Trajan and Hadrian, who restored and established its public buildings.

In the Roman and Byzantine periods

The “cultural centre” of Salamis during the Roman period was situated at the northernmost part of the city, where a gymnasium, theatre, amphitheatre, stadium and public baths have been revealed. There are baths, public latrines (for 44 users), various little bits of mosaic, a harbour wall, a Hellenistic and Roman agora and a temple of Zeus that had the right to grant asylum. Byzantine remains include the basilica of Bishop Epiphanos (AD 367–403). It served as the metropolitan church of Salamis. St. Epiphanios is buried at the southern apse. The church contains a baptistry heated by hypocausts. The church was destroyed in the 7th century and replaced by a smaller building to the south.

There are very extensive ruins. The theatre, and the gymnasium have been extensively restored. Numerous statues are displayed in the central court of the gymnasium most of which are headless. While a statue of Augustus originally belonged here, some columns and statues originally adorned the theatre and were only brought here after an earthquake in the 4th century. The theatre is of Augustean date. It could house up to 15.000 spectators but was destroyed in the 4th century.

The town was supplied with water by an aquaeduct from Kyhrea, destroyed in the 7th century. The water was collected in a large cistern near the Agora. The necropolis of Salamis covers ca. 7 km² to the west of the town. It contains a museum showing some of the finds. Burials date from the geometric to the Hellenistic period. The best known burials are the so-called Royal-Tombs, containing chariots and extremely rich grave gifts, including imports from Egypt and Syria. A tomb excavated in 1965 by the French Mission of the University of Lyon brought to light an extraordinary wealth of tomb-gifts, which also attest trade relations with the Near East.

In what is known as the “First Missionary Journey”, Paul the apostle and the Cypriot-born Barnabas made Salamis their first destination, landing there after heading out from Antioch of Syria. There they proclaimed Christ in the Jewish synagogues before proceeding through the rest of the island (Acts 13:1-5). Tradition says that Barnabas preached in Alexandria and Rome, and was stoned to death at Salamis in about 61 CE. He is considered the founder of the Church of Cyprus. His bones are believed to be located in the nearby monastery named after him.

Several earthquakes led to the destruction of Salamis at the beginning of the 4th century. The town was rebuilt under the name of Constantia by Constantius II (337–361) and became an Episcopal seat, the most famous occupant of which was Saint Epiphanius. Emperor Constantius II helped the Salaminians not only for the reconstruction of their city but also he helped them by relieving them from paying taxes for a short period and thus the new city, rebuilt on a smaller scale, was named Constantia. The silting of the harbour led to a gradual decline of the town. Salamis was finally abandoned during the Arab invasions of the 7th century after destructions by Muawiyah I ( reigned 661-680 ). The inhabitants moved to Arsinoë (Famagusta).

Archaeological excavations at the site began in the late nineteenth century under the auspices of the Cyprus Exploration Fund.[3] Many of these finds are now in the British Museum in London.

Excavations at Salamis started again in 1952 and were in progress until 1974. Before the Turkish invasion there was much archaeological activity there; one French Mission was excavating at Enkomi, another at Salamis and the Department of Antiquities was busy almost throughout the year with repairs and restorations of monuments and was engaged in excavations at Salamis. After the Turkish invasion the international embargo has prevented the continuation of the excavations. The site and the museums are maintained by the antiquities service. Important archaeological collections are kept in the St. Barnabas monastery. In the District Archaeological Museum there are marble statues from the gymnasium and the theatre of Salamis, Mycenaean pottery and jewellery from Enkomi and other objects representative of the rich archaeological heritage of the whole district.

The public buildings uncovered at the city site of Salamis date to the post-Classical period. The Temple of Zeus Salaminios, whose cult was established, according to tradition, by Teucer himself, must have existed since the foundation of the city; the extant remains date to the late Hellenistic period. Early excavators discovered in the esplanade of the Temple of Zeus an enormous marble capital carved on each side with a caryatid figure standing between the foreparts of winged bulls. Now in the British Museum’s collection, the function of the capital remains unclear, although it does indicate influence from Achaemenid art and is consequently dated to between 300 and 250 BC.