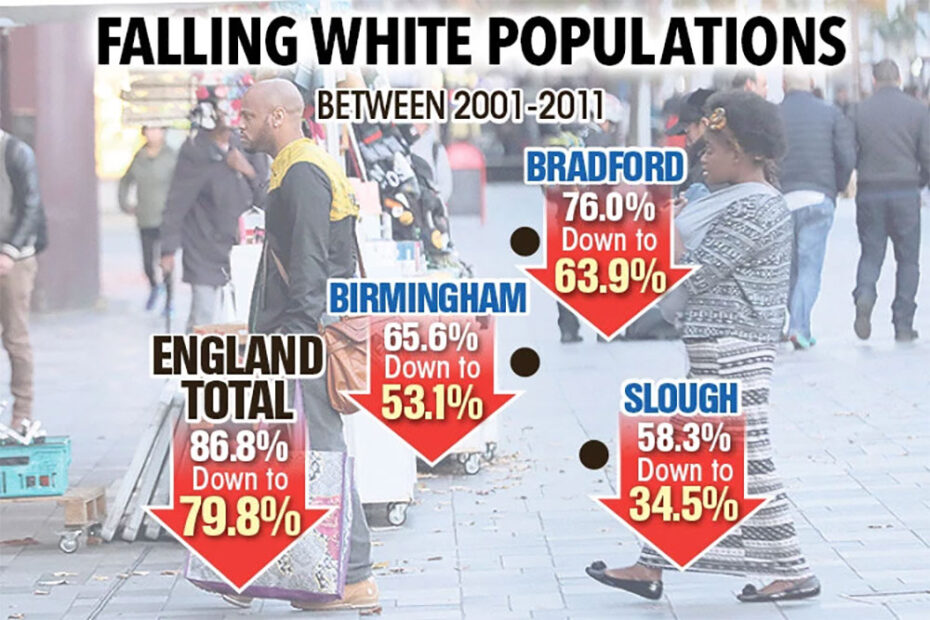 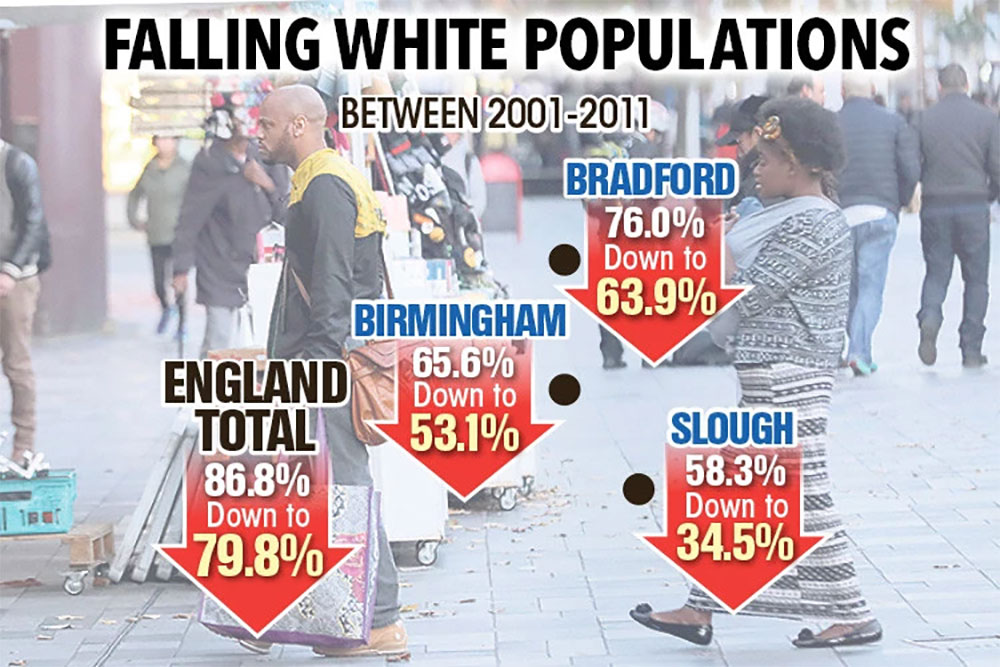 WHITE people are leaving some towns at record rates as ethnic minorities move in, a study shows.

England’s white population overall fell from 86.8 per cent in 2001 to 79.8 in 2011. During that ten-year period, the number of white residents in Newham, East London, dropped from 33.6 per cent to 16.7 per cent. And in Slough, Berks, it fell from 58.3 per cent to 34.5. Leicester, Birmingham and Luton also saw large declines across the decade.

The study by diversity researcher Professor Ted Cantle found some white people felt where they lived was “no longer for them”.

He said: “White people are leaving urban areas in a disproportionate number and avoid moving to diverse areas when they do move.”

“Some made no bones about it — they are moving out because ‘they’ are moving in.”

“Policies may be needed to encourage white British residents to remain in diverse areas.”

In one case a community cohesion officer in Yorkshire told Prof Cantle he was the first Asian to move into a particular street and that within three years virtually every white family had gone. He said: “Some of those families made no bones about it – they said they are moving out because ‘they’ are moving in.” The research looked at census data from 1991, 2001 and 2011 to examine the movement of the white British population.

Prof Cantle predicts the divide between minorities and the white majority will be even greater by the 2021 census and has advised the government to intervene.

Report describes the pace of change in some urban areas as ‘striking’, with a decrease in the white population of more than 50 per cent between 1991 and 2011. Other places that recorded large drops included Birmingham, where it went from 65.6 per cent to 53.1 percent, in Leicester, where it decreased from 60.5 per cent to 45.1 per cent, and Luton which fell from 64.9 per cent to 44.6 per cent.

Whites left London at three times the rate of minorities. This was all despite London’s population increasing by approximately one million. Prof Cantle concluded in his report: “Segregation remains, or is increasing.

“Minorities in many towns and cities, traditionally the areas of settlement for minorities, are becoming more isolated from White British people.”

“Segregation has been linked to prejudice and intolerance of the ‘other’ due to the lack of contact and interaction across social and cultural boundaries.”

“With this in mind, present patterns suggest that policies may be needed to encourage White British residents to remain in diverse areas..and choose, rather than avoid, diverse areas when they do re-locate.”

Labour’s Chuka Umunna, chairman of the parliamentary group on integration, said: “All parts of society have a role to play in preventing the UK becoming more fragmented.”

A recent major review warned British laws and traditions need to be vigorously upheld to stop ethnic segregation.
The report published in September also said waves of immigration have dramatically changed the character of some state schools and left Brits feeling unsettled.

Dame Louise Casey, the government’s integration tsar, blasted councils for “over worrying” about causing offence.
She said that only by promoting “core” British laws, traditions and cultures in every ethnic community can Britain hope to integrate fully and defeat the “hate-mongers” from the far-Right and Islamist extremists who want to divide the country. Dame Louise said one white manager at a community centre was so scared of offending ethnic minorities that he put up a “festive tree” instead of a Christmas tree.
She added said: “What offence did he think he was causing?

“What did we ever think would be offensive about celebration Christmas with a tree?”

Cities, such as London, have seen areas develop where the white British population is “increasingly dwindling”

Retired tool maker Russell Williams, 60, said he’d seen Slough change: “I’ve lived round here my whole and the mass immigration started when I was a kid. I was the only white kid in my cricket and football teams. I haven’t got a problem with it, some of my best pals are Asian, but some white people have a different attitude.

“I know a lot have moved away because they say it feels like a foreign country now but I don’t agree.”
Shop assistant Kash Butt, 37, who moved from Pakistan in 2005, said the “white flight” was fuelled by the younger generation and the closure of pubs and nightclubs.

The dad of two said: “Young English people like their night life but a lot of the pubs have closed down and there’s no nightclubs. Young Asians don’t care so much about that. They also don’t want to do the jobs as much like working in shops and cafes, they tend to go off to London and places like that to get better jobs.

“Most people I work with are Asian or Eastern European, there are only four white people out of about 20.”

MORE than two-thirds of Brits are united in the view that immigration has “divided” communities, according to a new poll. The negative view of immigration was one of the few unifying factors in the study which also suggests people in the UK are strongly nostalgic for the past.

The full report by Professor Ted Cantle is available HERE

Does this come as any surprise? After decades of fostering a policy of ‘Political Correctness’ most people have tired of being placed under constant pressure to appease immigrants, to mind what they say in case they offend, resulting in life becoming intolerable for most people. Dame Louise Casey, the government’s integration tsar, blasted councils for “over worrying” about causing offence, then she went on to say that one white manager at a community centre was so scared of offending ethnic minorities that he put up a “festive tree” instead of a Christmas tree.
She added said: “What offence did he think he was causing?

Really? We have reached a point where local authorities are putting up ‘Festive lights’ not ‘Christmas Lights’ where it can be regarded as offensive to say “Merry Christmas” forcing people to say “Happy Holidays”  How ridiculous is that. What we are seeing throughout the UK is “WHITE FLIGHT” on a grand scale.

As this demographic change continues, we are increasingly seeing towns and cities divided along racial lines and that will set the scene for social unrest in the future.

The report also suggested that “Policies may be needed to encourage white British residents to remain in diverse areas.” what would they be? Would the government implement measures to prevent people from fleeing, or would they bring in measures to push immigrants in to white areas?

The latter is already under consideration, with the possibility of Railway Sub-Stations that were closed under the ‘Beeching Axe’ to be re-opened. Whilst this may appear to be for the benefit of more environment friendly transport, it is actually to make access to leafy white areas, more accessible to ethnic minorities. However, no matter what they do, that vast majority of people will continue to live where they feel comfortable to live and it appears that the more people are forced to capitulate to the multi-cultural agenda, the more they will withdraw, as they are gradually becoming refugees in their own country.