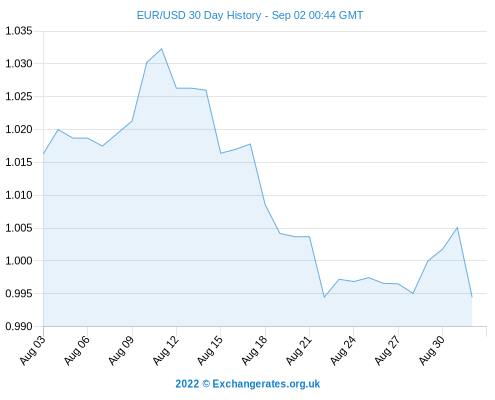 On Monday the 22nd of August 2022, the Euro fell below $1 USD for the first time in its history. it recovered slightly to just over $1 USD on the 29th of August, but once again, it has today fallen below the milestone once again. Is this the start of the end for the Euro?

There are many factors that have contributed to this fall, but it had to happen at some point. The Euro was at best a pseudo-currency that would always be doomed, held together with political rhetoric and collusion by the unelected, unaccountable and arrogant EU commissioners, who were always concerned with their own vision.

The Euro has fallen by 20% over the last two years, there is every possibility that it could fall by another 20% over the next two years, taking it in to junk territory. Once the tide of falling confidence begins to evolve in to a tsunami, anything is possible. With every fall in the Euro, the balance of payments rises as imported goods cost more and subsequently inflation will also rise.

The energy crisis caught Europe by surprise, despite being warned, they pursued a policy of becoming increasingly reliant on Russian Gas, then due to the sanctions and Putin’s demands to be paid in Rubles,  they were unable to meet their needs. This led to the start of the ‘triangle of hypocrisy’ which is Russian Gas being sold to China, then quietly being sold by China to Germany, at inflated prices. It’s still the same gas, the money still makes its way to Russia, but thanks to its own arrogance and bad energy policies, Germany was now paying several times the previous rate, for the same gas, yielding China a massive profit.

This also had the effect of pushing up wholesale gas prices worldwide, therefore, the UK which only had a small dependence on Russian gas (it should had been zero) is now paying several times the price that it was previously.

The UK will recover much sooner, as we have the means to plug the gap very quickly, from the North sea and fracking, but the wholesale prices will still remain high for the foreseeable, pushing the poorest quarter, or even one third, of the UK population in to fuel poverty.

Back in Europe, the cracks are being exacerbated by the cost of energy, inflation and recession, added to an already fragile structure that is based on massive debt, due to the insistence of the EU to expand, taking in countries that were not in economic sync with the Eurozone.

As it stands, the EU is caught between a rock and a hard place, on the one hand, they need to take drastic action to prop-up the Euro, but doing so, could push fragile economies, like Italy and Greece over the edge. If Italy in particular were to fall off a cliff-edge, there would be no salvation for the Euro, it could not survive the massive debt of Italy, the consequences could be catastrophic, to say the least.

As it stands, Germany has managed to stock up to 80% capacity, it needs to reach 85% to survive the winter, then at that point it could be in a position where it will not need to take the highest price when buying gas, but that will not repair the damage that has been done already.

The EU has managed to pull a Rabbit out of the hat many times, to protect the Euro, it remains to be seen if they will be able to do so once again, but as it stands, the Euro is now in the most precarious position that it has ever been.

Only time will tell, but for those who have any significant exposure to the Euro should think very carefully about their position, because as it stands, anything could happen.