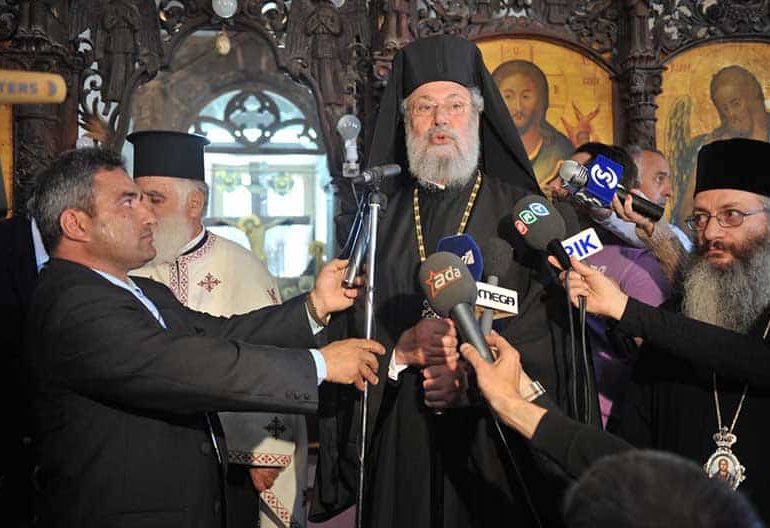 Northern Cyprus’ ‘foreign ministry’ on Monday lambasted Archbishop Chrysostomos for his ‘racist’ remarks when he admonished Greek Cypriots for crossing to the north to shop and to fly using Ercan (Tymbou) airport.

In his Easter message, which might have been expected to be one of unity and concord coming from a church figure, Chrysostomos instead censured those Greek Cypriots who go to the north “not to visit churches and the graves of their ancestors, but to transact with the occupation, for fun, and to use the illegal airport.”

The archbishop stopped short of calling these Greek Cypriots traitors.

Reacting via a statement, the north’s ‘foreign ministry’ said such commentary smacks of “a mediaeval approach and mentality.”

It urged the Greek Cypriot ‘administration’ to condemn remarks that tend to increase mistrust.

The statement went on to express grief that the archbishop’s references “indicate clearly that there has not been the slightest improvement in the racist and primitive stance of the church.”

In reality, the statement added, traffic and trade between the two communities are precisely what will serve to boost relations and cooperation, as well as economic interdependence, which is what Cyprus needs.

Other than his commentary on politics, Chrysostomos also railed against what he sees as degenerate mores. He cited the introduction of legislation on abortions, gender choice and the cohabitation of same sex-persons.

“It is obvious that these laws aim at destroying not only the religious but also the national component of our people,” the prelate said.

On social media, Chrysostomos took flak for his views, as well as for the fact he omitted to make any mention of the number one issue on people’s minds these days – the Mitsero mine murders.

We MUST separate the politics from the people. I’m not getting in to who did what, because NOBODY is innocent, even those born after 1974 who refuse to hold out an Olive branch to their fellow Cypriots, are just as bad if not worse.

The Ledra street area of Nicosia has burst in to life since 2003, with a constant flow BOTH WAYS, money flowing BOTH WAYS, but I do not hear anyone walking around Ledra street protesting outside any shop that sells to those crossing from the other side to shop and trust me, spending happens both ways.

With regard to the politics, what has been learned from the past? On an official level….NOTHING! All we hear is complaints about Turkish flags and the Turkish army, but what have our leaders done to demonstrate their wish for a unified Cypriot state? Plaster every building with Greek flags! This is an insult to anyone who is truly proud to be Cypriot.

What nation building steps has the ROC taken, to create a unified Cypriot state?

If we accept the notion that anyone with a Cypriot grandfather is Cypriot, whether they were born here or not (the official criteria to be obligated for national service or to apply for citizenship) then we must also accept that the number or Cypriots Nationals, including those eligible, living outside of Cyprus, is great than the number actually living here, with the vast majority by far living in English speaking countries, with children whose first language is English. Yet what did the ROC do to acknowledge those people? They actually REMOVED English as an official language, making them second class citizens.

Why are there no secular, English speaking state schools in every town, to encourage children of all backgrounds to learn, grow and bond together? Not a chance, so how do they expect people who have been raised in parallel societies to ever unite? There must be interaction, trade, nation building and sports if we are to create a nation out of the ashes that have been left by the sick fanatics who destroyed Cyprus and STILL insist on blaming everyone else for it! I have also noticed that those who seem to be the most hostile, don’t even live here!

Whilst I do not agree with the way that Turkey is exploiting the situation, has anyone considered that many Cypriots living under Turkish occupation feel exactly the same? Personally, I know many who do. Even so, we must try to tentatively interact on many different levels and that means people from both sides crossing, I doubt very much that stopping to get a coffee or something to eat is something we should be stressing about and certainly, it is nothing to do with the Church.

The sooner Cyprus becomes a secular state, with bigoted hypocrites like this Ogre and his band of merry men, gagged  and BANNED from commenting on anything political the better. I do not see him encouraging humanity, charity, education and respect…………..If he wants to cast aspersions, then he should start with the President who was actually defending the criminals of EOKA b’ or that same person who sanctioned the plundering of people’s bank accounts, or the endless list of corrupt officials……need I go on?