The mystery of the true coronavirus death rate 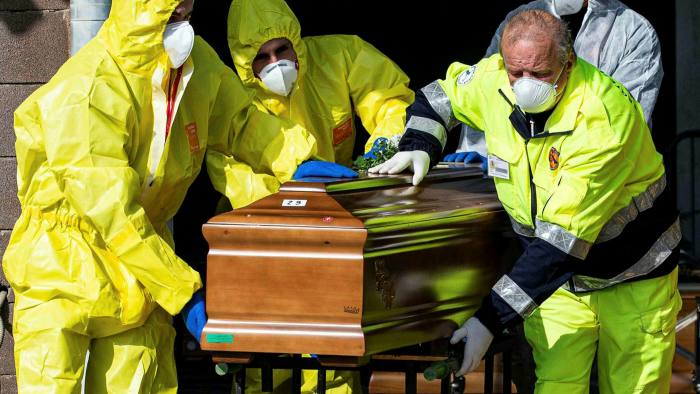 Without comprehensive testing and more precision over the cause of fatalities global comparisons should be treated with caution
The figure at the root of so much global angst about coronavirus is currently 4.7 per cent. That is the proportion of people, as of Sunday afternoon, who have died after being diagnosed with the virus — 32,137 out of the 685,623 who have tested positive for Covid-19 around the world. It compares with a death rate of around 0.1 per cent for seasonal flu and 0.2 per cent for pneumonia in high-income countries. However, 4.7 per cent is not only changeable but frustratingly unreliable, both for governments seeking to calibrate their policy response and for citizens trying to gauge how much they should worry. The proportion of people who have died from the disease varies strikingly from country to country. Researchers warn that there are so many uncertainties — not least over the true number of infections — that it remains almost impossible to draw firm conclusions about the death rate. Mike Ryan, executive director of the World Health Organization’s health emergencies programme, has outlined four factors that might contribute to the differing mortality rates: who becomes infected, what stage the epidemic has reached in a country, how much testing a country is doing, and how well different healthcare systems are coping. But there are other sources of doubt too, including how many coronavirus victims would have died of other causes if no pandemic had occurred. In a typical year, about 56m people die around the world — an average of about 153,000 per day.
Insufficient testing Arguably the biggest unknown about Covid-19 is the true number of people worldwide who have contracted the virus. Without that information no accurate death rate can be calculated. Many infected people will display either mild or no symptoms, and will remain absent from the data unless they are tested. Since resources are limited and different countries are testing to different extents, the size of the information gap varies from place to place. John Ioannidis, a professor of epidemiology at Stanford University, has branded the data we have about the epidemic “utterly unreliable”. “We don’t know if we are failing to capture infections by a factor of three or 300,” he wrote last week. If thousands more people are surviving than we know about, then current mortality rate estimates are too high — perhaps by a large margin. Researchers at the University of Hong Kong have estimated that, in Wuhan, where the pandemic began, the likely death rate was 1.4 per cent — much lower than the previous estimate of 4.5 per cent, which was calculated using official statistics on the region’s cases and deaths. In the UK, where the government has been criticised for a slow initial response, only the most serious cases are being tested. In total 1,231 people have died out of 19,758 confirmed cases, giving a death rate of 6.2 per cent. Rosalind Smyth, professor of child health at UCL, said official UK coronavirus data was “so misleading that it should not be used”.

Using conservative estimates, the true number of people infected “is likely to be 5-10 times higher”, she said. The age of people infected Much depends on who gets infected, how old they are and whether they have underlying health conditions. It is well known that those who are older are more likely to become seriously ill and die. But Robin May, professor of infectious diseases at Birmingham university, notes: “There are 70-year-olds who are wheelchair bound and others who run miles every week.” The WHO has also warned that younger people are “not invincible” and must take the virus seriously.

Italy has to date been the worst affected country in Europe, with 10,023 deaths and 92,472 infections, giving a crude mortality rate of 10.8 per cent. But the average age of Italians who have tested positive is 62, and the vast majority of those who have died have been 60 or over. “Italy has been a poster child for healthy people living into old age,” said Dr Ryan. “Unfortunately, in this case, having that older population may mean that the fatality rate appears higher because of the actual age distribution of the population.” But different countries are also reporting cases and deaths in different ways: in Italy, Covid-19 is listed as the cause of death even if a patient was already ill and died from a combination of illnesses.

“Only 12 per cent of death certificates have shown a direct causality from coronavirus,” said the scientific adviser to Italy’s minister of health last week. Spain’s national government simply lists how many people with confirmed cases of coronavirus have died and provides no extra information on any other medical conditions. In South Korea about a third of confirmed cases were in people aged 30 or under © Chung Sung-Jun/Getty In South Korea, which has a younger population than Italy, about a third of confirmed cases were in people aged 30 or under: 152 people have died so far out of 9,583 infections, giving a mortality rate of 1.6 per cent. In Germany, which has recorded 455 deaths, the majority of infections have occurred in people aged 15 to 59. Based on the available data, the country’s death rate is about 0.8 per cent, but this may also reflect its aggressive approach to testing people with milder symptoms. Risk of death from other causes In the UK, about 150,000 people die every year between January and March. To date, the vast majority of those who have died from Covid-19 in Britain have been aged 70 or older or had serious pre-existing health conditions. What is not clear is how many of those deaths would have occurred anyway if the patients had not contracted Covid-19.

Speaking at a parliamentary hearing last week, Professor Neil Ferguson, director of the MRC Centre for Global Infectious Disease Analysis at Imperial College London, said it was not yet clear how many “excess deaths” caused by coronavirus there would be in the UK. However, he said the proportion of Covid-19 victims who would have died anyway could be “as many as half or two-thirds”. What stage of the outbreak preparations begin At what stage in the epidemic cycle a country begins to prepare its healthcare system is crucial. If a healthcare system becomes overwhelmed, as happened in Italy and parts of China, the standard of care that patients receive is likely to fall. This is likely to increase the mortality rate. Recommended Coronavirus: free to read Coronavirus tracked: the latest figures as the pandemic spreads

In one hospital in Lombardy, northern Italy, a chronic shortage of equipment means staff are using snorkelling masks bought from Decathlon, a leisure goods chain, to hook up patients to oxygen supplies. Given the number of patients in intensive care in the region, the WHO’s Dr Ryan said last week, the fact that doctors are saving “so many is a miracle in itself”. Dr Simon Clarke, associate professor in cellular microbiology at the University of Reading, said it was “not a given that [the UK and Germany] will end up in exactly the same place that Italy is in,” because “you can’t draw any cast-iron conclusions from a trajectory on a graph”. Being behind the curve gives countries longer to prepare for an outbreak and learn from others’ mistakes.