A buy to let nightmare that happened to me 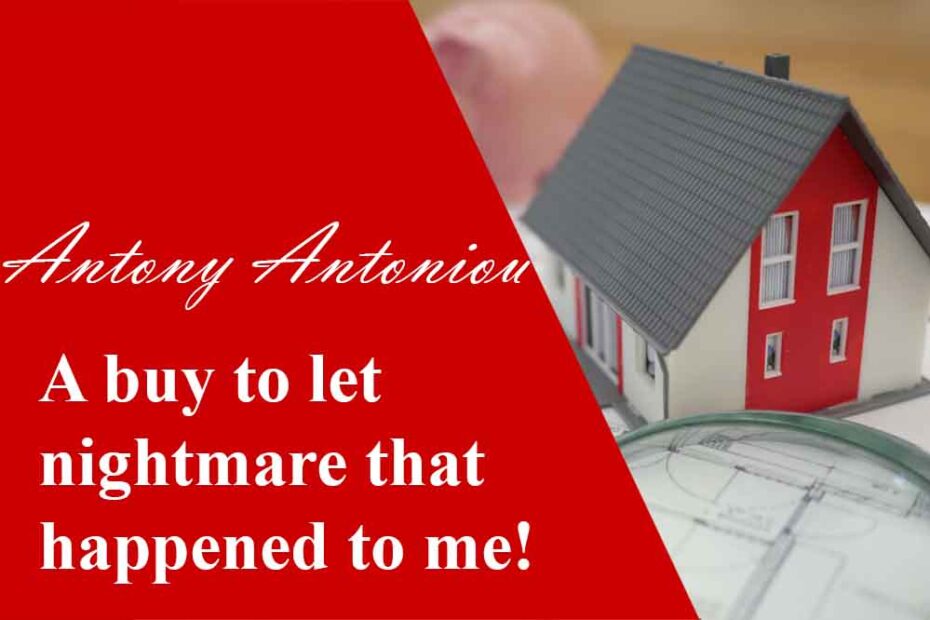 A buy to let nightmare that happened to me

in this video I’d like to tell you what the eviction laws in this country did to me,  I had a few projects in mind and I made the serious mistake of renting out my home which is not a castle it’s just a beautiful quaint little cottage  in a village on the edge of Northampton. I absolutely love the fact that I live somewhere that has a history going back over 200 years and I’m privileged to be just another small chapter in the history of this property.

I was away during the summer while I was away the people in the property moved out and they moved a friend in, despite the fact that I told them not to and did not give them permission to do so.

I got back to the UK beginning of September 2016 and I found a woman living here with two children. I came to see her and I told her that I did not want to re-rent the property, I didn’t give permission for the property to be re-rented.  I don’t want to be unreasonable as I can see that you have children so I said to her, “look it’s the beginning of September, I’ll give you until Christmas, in fact so that I don’t distress you through the holidays you can move sometime just after the New Year.”

She said yes, wonderful thought, that would be sorted soon. I came back in January and asked her what what’s happening, she said “well the council told me I mustn’t go”

I contacted the council and I was informed (this is where I actually pointed out something in my previous video) I learned this the hard way, the council then informed me that because I had accepted a rent from this woman, she now had an assured tenancy, whether I had given it in writing to her or not, and therefore I couldn’t just force her out.

Having a tenant in a property with an assured tenancy, but without something in writing meant that nine out of ten solicitors were stumped.

I think I paid three or four different solicitors upwards of £200 pounds each, just to have a look at what I sent them in an email which was basically a one-page summary, so that they could then tell me what they’re going to charge to help me with this.

The problem was for me was that she moved in after the 2015 deregulation act, which meant that she then argued further down the line or rather, I was told that she would probably argue that she wasn’t given a gas safety certificate, how to rent guide, EPC Etc before moving in, meaning that the court would reject a section 21 eviction.

This went on for two years, finally I found some solicitors in London who explained to me the process of how they would go about it I had no choice at this point I was a lot of money out of pocket money I paid solicitors for advice that was not advice whatsoever, it was just a token gesture to justify them charging me to just read a one page summary.

In total, I had my personal effects in storage for over three years which was over five thousand pounds alone, and I was effectively homeless through this period, because I had just sold the last of my buy-to-lets when this happened, because I had other plans, so I was left in limbo through all this period.

I spent a fortune in legal fees, eventually we went to court with a manual application, we had to go before a judge and as I said previously, we went twice and both times the judge found in her favour to delay.

We now had entered 2019 and if you remember the home stretch to the election, this was when Corbin was promising that if he were to get into power, he would give private tenants the right to buy, so I started panicking that I was going to lose my home.

To cut a long story short, in the end I overcame the argument about the gas safety certificate and so on because although I was away a friend of mine had dropped the paperwork off and she was a magistrate so she made a sworn statement to that effect and realizing that she was going to be evicted, as soon as she found another property she moved out, fortunately there was no damage to my property, but I was thousands of pounds out of pocket, a five-figure sum, not to mention the stress and inconvenience and the fact that my life was on hold for three years.

While I was in limbo, this was all perfectly legal and this could happen to you, so be very, very careful  if a tenant moves into your property and allows someone else to move in, if you exercise any kindness and give them a few weeks, they will then become a tenant.

The same argument that I made about squatters moving in, can be done with tenants forcing themselves on your property, because if they move in and they deposit money into your bank account which they could get the details to from the previous tenant, they could move in pay pay some money into your account you might not take any notice of it because you may think your tenant has paid you rent just from a different account, but in fact that payment has come from somebody else and suddenly you are stuck with a new tenant, with no tenancy.

With the impending removal of the section 21, you will seriously have a nightmare on your hands so whilst I completely support anything to give tenants security and peace of mind there are many circumstances where landlords need to be protected as well especially the thousands of landlords who are literally left to buy landlords or accidental landlords perhaps you’ve decided to rent out your home because you’ve been given a job in another part of the country for six months or a year what happens then if your job ends or it ends prematurely and you can’t recover your home just a few thoughts to for you to ponder on over the weekend and I will see you in the next video.