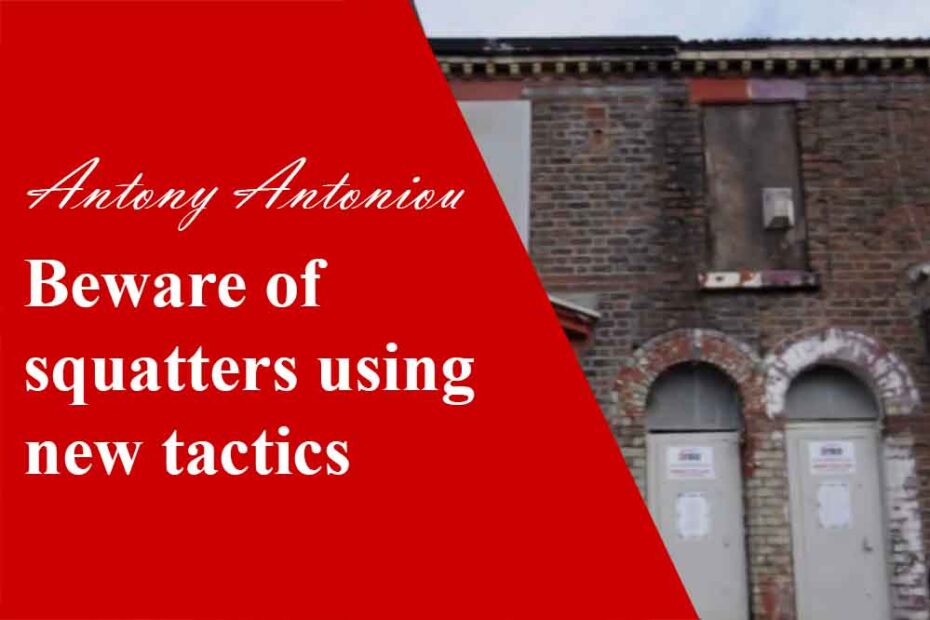 Squatters are getting more devious! I was contacted by somebody yesterday who has found that people literally just moved into his house and started ripping things out and re-plastering it as though they owned it. The chap bought the house and it was securely boarded up not sure exactly what his plans were were or are, but it appears that the property had sat there appearing to be abandoned for quite a while and people simply moved in.
They even contacted the council and arranged for the council tax to be put on their name!
They hadn’t gone for title deed fraud. so I’m not exactly sure what their motive were was or is, perhaps they were thinking of some sort of adverse possession, perhaps they were just thinking of squatting I’m not really
certain, but it did literally make me think of something that I need to point out to all of you in case you get caught in the same situation.
For the last few years squatting has been made illegal if people enter your property illegally, you can call the police, you don’t simply have to prove that they broke in like you used to, the fact that they are in your property illegally is a crime, and the police will act but, ironically if they’ve committed title deed fraud and stole your identity, then transferred the property into their name, the police will simply claim that
it’s a civil matter and there’s nothing they can do. Obviously in their defence, they are too busy chasing up these nasty people who have dared to express an opinion on Twitter or something like that I suppose, but there is something that does happen that you do need to watch out for if you have squatters in your property if there is anybody who for any reason shouldn’t be in your property, keep an eye on your bank account and if you see any payment as in deposit transfer into your account that is unaccounted for, try and establish what it is and if you’re not certain, refund it because this is what will happen and this is what they do now if they move into your property. If they’ve done a bit of research on you and somehow they’ve got access to your Bank details which they may have discovered from all sorts of different sources if they make a transfer into your account and after a reasonable amount of time, a specific period is not defined by law, a day or two wouldn’t be reasonable but a month or more definitely would be,  so it’s somewhere in between.
So if they’ve transferred money into your account and you haven’t refunded it, they can then argue that they have paid you a rent and by your actions you have accepted the rent, what happens then is that they become tenants by default and the council will take great pleasure in informing you that by your actions you have agreed that these people are your tenants without a written lease and they cannot be evicted without you going to the courts. You will then face the arduous prospect of finding a solicitor who is going to take on this type of eviction and I assure you that 9 out of ten solicitors will ask you for a fee to look at the facts and decide what they are going to charge you and more than
likely you will get nothing more than “we could say this, or this, or this, but they could say this, that, or the other, on top of that if they have moved in under these circumstances that means that you have not complied with the 2015 deregulation act which compels you as a landlord to issue a gas safety certificate, a how to rent guide, energy performance certificate and all of the rest of the documentation to the tenants
and have evidence of doing this before they moved into the property, meaning that you can’t even go down the section 21 route, you will have to manually go through the courts and go before a judge.
As any of you with experience of a judge will know, when you go before a judge the defendants can also speak to the judge and I assure you that it will not get a decision on the first, maybe the second or even the third time you go up before a judge in the court, in the meantime you’ve got people in your property you can’t do anything about it and you’re paying ridiculous legal fees which you will not be able to recover so be really really wary.
Check your properties, make sure none of your mail goes to vacant properties, make sure the title deed is not at any vacant property and if there is any inkling of anybody going anywhere near your property, please keep an eye on your bank account because once they enter money to your bank account, it doesn’t matter whether you wanted it, it doesn’t matter whether you were happily accepted it, if they can prove this to a police officer and the local Council that they’ve transferred money into your account and you did not refund it, by your actions you accepted it and you deemed them to be tenants, this is how ridiculous the law is!
I just thought I’d let you know and I will see you in the next video
5 1 vote
Article Rating