Teaching assistant, 44, reports online lover to police for hiding his marriage from her as new figures reveal officers are dealing with 20 ‘Tinder crimes’ a week

The number of Tinder-related police call-outs has more than doubled in the last three years, official figures show.

Police now receive more than 20 reports a week linked to the online dating app. As recently as 2015, police had about eight Tinder-related calls a week, or a total of 442. Police figures indicate this rose to 1,087 in 2018 – although as not every force provided a full set of figures, the true total is likely to be even higher. The statistics come as teaching assistant Anna Rowe, 44, revealed how she went to the police after being duped into an affair with a married father she met on Tinder. 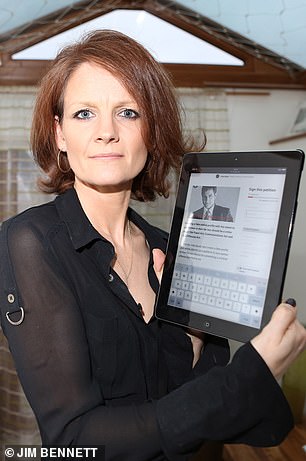 Ms Rowe, from Canterbury, Kent, spoke to ‘Anthony Ray’ for six months before he disappeared and she now wants the Government to make posing as someone online to forge a fake relationship illegal. The jump in reports follows a spate of high-profile crimes in which fraudsters, rapists and killers have used the smartphone app to trawl for victims.Forces did not specify the nature of the incidents logged, but previous research has found that around a third of crimes involving dating apps are sexual assaults and rapes.

Freedom of information requests sent to every British police force found Devon and Cornwall to have the most Tinder-related call-outs, with 86 in the year to December 10. Assuming they continued to receive calls at the same rate, this would have risen to 91 by the year’s end. Essex and the West Midlands were close behind with 84 and 83 respectively, based on similar calculations.

Many incidents occurred on public transport, with British Transport Police recording 51 calls in 2018. A number of forces did not respond to the request, while others did not provide figures for the entire year, meaning the true scale of the problem is likely to be even greater than the data suggests.The changing face of dating – and the associated risks – have prompted some innovative responses by police.

Avon and Somerset police placed its own ‘lonely hearts’ listing on Tinder in 2015 – using the name Bobby – to warn users to stay safe when meeting strangers. Grace Millane, the 22-year-old backpacker murdered in New Zealand last year, is believed to have met her alleged killer on Tinder. Miss Millane, from Essex, went missing in December and was found dead in parkland near Auckland. Jesse Kempson, 26, was arrested for her murder but denied the charge in court last week.

Serial con-artist Kris Lyndsay, from St Austell in Cornwall, was jailed for four years in 2016 after using Tinder to swindle women. Lyndsay conned his victims out of £13,000 before he was jailed. He told them he had lost his wife and daughter in a car crash to win their trust and boasted about his fictitious businesses.

Mother-of-two Annemarie Fletcher, from Glastonbury in Somerset, parted with a watch and diamond ring worth £40,000 after he claimed he was having cash flow issues at work. In 2017, Jonathan Frame was jailed for 18 months following a similar scam. The 32-year-old from Swinton, Greater Manchester, would take control of his partners’ bank accounts to fund a lavish lifestyle. He admitted defrauding two women of £6,990.

A teaching assistant went to police after being duped into an affair with a married father she met on Tinder.

Anna Rowe, 44, met ‘Antony Ray’ on the app in 2015 and exchanged thousands of messages with him before meeting in person. He told her he had been divorced for 15 months but was in fact still married and using separate phones to hide his affairs from his family. He vanished after six months, claiming to be looking after his ill mother. Miss Rowe, from Canterbury, alerted police to his activities but he was never arrested. She now wants the Government to make posing as someone else online to forge a fake relationship illegal.

The act is known as ‘catfishing’, after a film and TV series which documents the phenomenon.

While it is totally inappropriate for a married ‘person’ and I emphasise person as this article seems to be solely focused on men, well the figures speak differently. In a leak of personal details by a well known site founded on discretion, there were more married women than men!

Anyway, this lady’s argument would carry more weight, were she on a serious and more mature dating site, that is not the case with Tinder, unless we are expected to believe that people swiping left and right, basing what could be a life-changing decision on a whim, with no information about the candidate whatsoever…..is there anything more shallow than that?

Now if she were on a prestigious dating site, with members displaying detailed information about themselves that could be with intent to deceive, then that is another matter, but this women was on a MOBILE APP that is designed to be little more than a casual ‘hook-up’ site, as it is commonly referred to.

If this were to be stopped, then it could become law for sites to declare that they have practised ‘DUE DILIGENCE’ with all applications and taken every step to get a signed statement from the member that they are free and single, but how could that work in reality. There is also the real life scenario, that is the way things used to be done, meeting someone in real life, socially and going forward from there, which is something that nobody could monitor.

There is always the option of course, for a unified public register of marriages, but I can assure you that there would be more women objecting to that than men…………I wonder why?