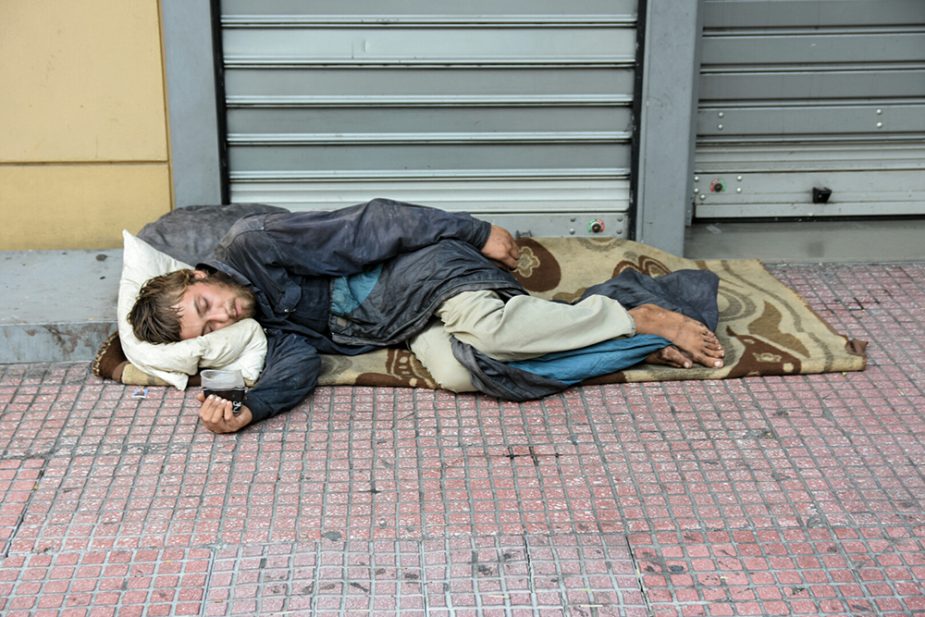 Homelessness is devastating, dangerous and isolating.

On average, homeless people die at just 47 years old. People sleeping on the street are almost 17 times more likely to have been victims of violence. More than one in three people sleeping rough have been deliberately hit or kicked or experienced some other form of violence whilst homeless. Homeless people are over nine times more likely to take their own life than the general population

What causes homelessness?
People become homeless for lots of different reasons. There are social causes of homelessness, such as a lack of affordable housing, poverty and unemployment; and life events which cause individuals to become homeless. People can become homeless when they leave prison, care or the army with no home to go to. Many homeless women have escaped a violent relationship. Many people become homeless because they can no longer afford the rent. And for many, life events like a relationship breaking down, losing a job, mental or physical health problems, or substance misuse can be the trigger. Being homeless can, in turn, make many of these problems even harder to resolve.

How many people are homeless?

There is no national figure for how many people are homeless across the UK. This is because homelessness is recorded differently in each nation, and because many homeless people do not show up in official statistics at all. Government street counts and estimates give a snapshot of the national situation. The latest figures showed that 4,751 people slept rough across England on any given night in 2017 – a 15% increase compared to the previous year, and more than double the amount in 2010. Last year 57,890 households were accepted as homeless in England. In Scotland, 34,100 applications were assessed as homeless and in Wales 9,210 households were threatened with homelessness.

Rough sleeping
Rough sleeping is the most visible form of homelessness, and when most people think of a homeless person they tend to think of someone sleeping rough on the streets. Many people who sleep rough will suffer from multiple health conditions, such as mental health problems and drug misuse they are also in greater danger of violence than the general population.

Statutory homelessness
Local authorities have a duty to secure a home for some groups of people. This is often referred to as the main homelessness duty. Every year, tens of thousands of people apply to their local authority for homelessness assistance. To be legally defined as homeless you must either lack a secure place in which you are entitled to live or not reasonably be able to stay. However, in order to receive assistance under the main homelessness duty, there are further strict criteria that you have to meet. Local authorities may initially provide temporary accommodation to households who might meet these criteria, mainly families with children.

Hidden homelessness
Many people who are not entitled to help with housing, or who don’t even approach their councils for help, aren’t counted in the official statistics. Many stay in hostels, squats or B&Bs, in overcrowded accommodation or ‘concealed’ housing, such as the floors or sofas of friends and family.

What can be done to end homelessness

It is an utter disgrace in this day and age, that people should be forced to sleep in the streets, no matter who they are. Throughout the UK, there are millions of square feet of empty industrial units, mostly owned by Pension companies or investment companies, due to the way the tax system works. Yet, due the fact that it is not normally their own money sat there, these companies are happy to leave these units empty for years, waiting for the next victim who is prepared to sign up to the extortionate rents that they are demanding.

In the meantime, many of these units could used as emergency shelters, all they would need is showers and toilets, which could even be mobile and people without doubt, would be willing to donate, bedding, food, or whatever is necessary, many people would also volunteer, I’m sure. What is needed as a starting point is a place where anyone who finds themselves homeless can head for, where they can shower, stay warm, eat, sleep and be safe. These emergency centres could also be a place where volunteers could offer support, counselling, advice with seeking employment and housing.

The simple fact that nothing is being done apart from random acts that are little more than token gestures, is a matter of national shame. We are inundated with request for donations from charities who are  to say the least, quite reserved about revealing where donations actually go, in many instances, less that 10% of donations actually make it to the intended recipients, the rest seems to vanish in ‘expenses’

As I see it, it would not matter who wishes to arrive at a shelter to sleep, or eat or seek help, I doubt very much that anyone would want to seek refuge in a shelter, unless they really needed to. The cost of this would actually be minimal and given the correct financial incentives, I am certain that corporations would be more than willing to make empty units available for a worthy cause, but they will not do it spontaneously, they would need a combination of stick and carrot, but it can be done.

It is with this in mind, that I have started a petition, to request that the Home Secretary takes action to encourage or even force corporations to make empty space available for use as shelters.