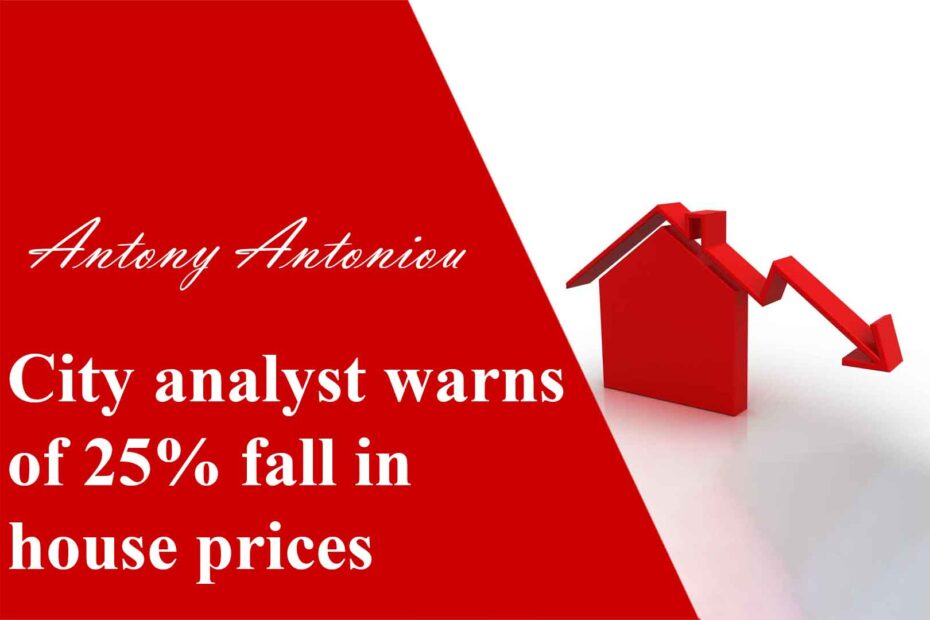 House prices look set to fall sharply in the coming months, with several leading analysts predicting a double-digit drop in average prices as a result of the sharp rise in mortgage rates.

The latest economist to warn that property prices will ‘inevitably’ fall, after average fixed-rate mortgage deals climbed to over 6% last week, is Roger Bootle.

With lenders continuing to push up rates in response to the rapidly rising cost of borrowing, Bootle, one of the City’s leading economists, says that averting a 1990s-style slump in the housing market is now near impossible.

In his latest column for The Telegraph he sheds light on how the UK and world economies are performing and the challenges facing the world’s policymakers.

Bootle said that as mortgages get more expensive, the impact on property prices would become more severe.

He wrote: “The last couple of weeks have seen alarm building in the mortgage market, with gathering consequences for the housing market. The latest RICS survey of surveyors; views of the market, released on Wednesday, will give us an up-to-date snapshot. How dire could things get?

“It is vital to put current developments in context. Many people will blame the government’s botched mini budget for today’s mortgage market travails. It is true that the announcement of large net tax cuts made the likely future level of Bank Rate higher.

“Also, the loss of confidence caused by how the mini-Budget was presented resulted in longer-term rates being higher than they needed to be.

“But the fundamental truth is that higher interest rates were on the way in any case. You only have to look at what other countries, led by the US, have been doing.

“And, at the bottom of it all, is a surge of inflation which has to be overcome and a tight labour market which needs somehow to be loosened up.”

Bootle reflects on the fact that the recent hike in interest rates has “shocked” a number of people because they have got used to an ultra-low level “which is without precedent in the whole of our history”.

He also pointed out that before the recent cycle of rate rises began in December last year, Bank Rate was 0.1%.

“You didn’t need to be John Maynard Keynes [a renowned economist] to realise that this was an aberration and the medium-term risk was all one way.

“Similarly, house prices have been rising relentlessly now for many years. Since 2012, they have risen by 66%, well in advance of the overall increase in consumer prices.

“In real terms, house prices have increased by over 30%. This dramatic growth has been reflected in a record level of the ratio of average house prices to average earnings. It currently stands at 7.8, above the previous peak of 7.5, registered in 2007. The long-term average is 5.1.

“It is true that so-called affordability – that is to say, the percentage of a typical mortgagee’s income taken up by mortgage payments – has until recently been pretty much average by historical standards.

“But that is because interest rates have been so absurdly low. Once rates return to some sort of normality, affordability will be strained.”

Looking ahead, it is highly likely that the Bank Rate will probably rise considerably from the existing 2.25% as the bank of England seeks to curb inflation.

Bootle predicts that the bank rate is likely to hit 6%, or possibly slightly higher.

He urges housing market commentators to dismiss the supply-demand imbalance in the housing market, and better understand that “willingness” to buy property is empty without “ability” – and that is primarily driven by “incomes and finance”.

He added: “Anyone who thinks that house prices can’t fall needs to look at the history of the market. Average house prices fell by about 20% between 1989 and 1992 and again by only slightly less than this in 2007-9.

“Actually, the picture is starker than that because in earlier housing downturns the market was able to adjust a good deal via higher inflation rather than outright falls in prices. In real terms, average house prices fell by about 30% in 1973-1977 and by more than this in 1989-92.

“I suspect that if I am right about interest rates, average house prices will probably fall by between 10% and 15%. That would probably translate into a fall in real terms of between 20% and 25%, making this the third largest fall in the last 50 years.”

While Bootle accepts that his price projection may seem “apocalyptic”, after the sharp rise in prices on the scale that we have experienced, such a correction is not extraordinary. “Nor is it all bad”.

He explained: “For new borrowers, lower prices will improve affordability. Moreover, once banks pass the majority of interest rate rises through to their depositors, many savers who have been extremely hard done by because of the nugatory interest rates that they have received on their savings, will at long last get more.

“There is, though, a danger of something much worse. What the economy needs is for house prices to drift down gently. It is in no one’s interest that they should crash.

“That would be a nightmare, not only for those caught up in it, but for the monetary authorities. For this would run the risk of causing severe financial instability.

“This is why, although interest rates have to go up a fair bit, starting with a largish rise at next month’s meeting of the MPC, the overall approach needs to be “softly, softly”. This combination is going to be a difficult act for the Bank of England to pull off.”