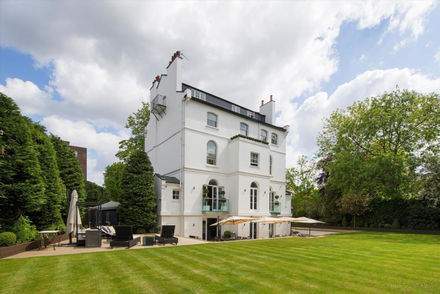 The world’s elite is poised to buy back into central London, encouraged by the speed of the UK vaccine roll-out and and discounted price tags – according to new data published today.

Sales and prices in the exorbitant core of the capital plummeted in 2020, due to Covid-19 and the lack of international buyers.

The number of prospective buyers registering to view £10 million plus properties more than doubled in the year to January, compared with the same 12-month period the year before (January 2019 to January 2020), according to Knight Frank.

The follows a year in the doldrums. The marked absence of overseas buyers, unable to fly, meant the number of viewings in this price bracket fell by 36 per cent over the course of the pandemic – the steepest drop in a decade.

Total spend was £1.62 billion in 2020, down 12 per cent from £1.85 billion the previous year – when Brexit and political uncertainty were the main factors stifling transactions.

“We have made price reductions on trophy homes over the course of last year up to as much as a fifth” one top end estate agent told Homes & Property. Savills also put prices 20 per cent below the 2014 peak.

Such price adjustments, London’s ongoing reputation as a safe haven for wealth, and pent-up demand to buy in the likes of Mayfair and Knightsbridge, will tempt the international buyer back to London over other leading global cities once flights reopen, Knight Frank claimed.

“For international buyers, there is a huge disparity between the desire to buy and the ability to view,” said Tom Bill, head of residential research at Knight Frank.

“Many have positioned themselves to act quickly once rules are relaxed and the anecdotal evidence is growing that the success of the UK’s vaccine roll-out is an important consideration,” he says.

The luxury market could rebound strongly within the new few months due to the speed of the vaccination programme, claims Nick Whitten at JLL.

“While other exclusive residential markets across the world could still be in a form of lockdown, London could be fully open for business by the spring,” he says.

Global confidence in London and the UK has also been buoyed by the Prime Minister’s roadmap, announced this week.

But it’s not all about the international buyer. “The price adjustment has let domestic buyers back into the market,” says Shana Edwards of Rokstone.

“We are seeing Londoners who have been working abroad being relocated back to the City because of Brexit.”

Peter Wetherell, of Wetherell in Mayfair, agrees that the most active buyers are British ones, followed by the Europeans and buyers from the Middle East. With the pound strengthening on the back of the vaccine roll-out, the currency play is now less relevant to Americans, he explains.

The Knight Frank annual Wealth Report, also published this week, found that despite the sluggish year at the luxury end of the London property market, the capital has the highest number of “prime” homes (worth more than £2 million) of any global city and has the highest number of millionaires (measured in the $ dollar), beating New York and Paris.

Savills forecast price growth of four per cent in central London over 2021, but this prediction could yet be updated due to the speed of the vaccine roll-out.

Such a positive outlook even before the virus is eradicated is the first real glimmer of light for those working in the luxury inner London housing market (dubbed Prime Central London or PCL).

However, it highlights the financial disparity in the capital and will serve to pull up mainstream house prices too, stretching affordability on the lower rungs of the property ladder.