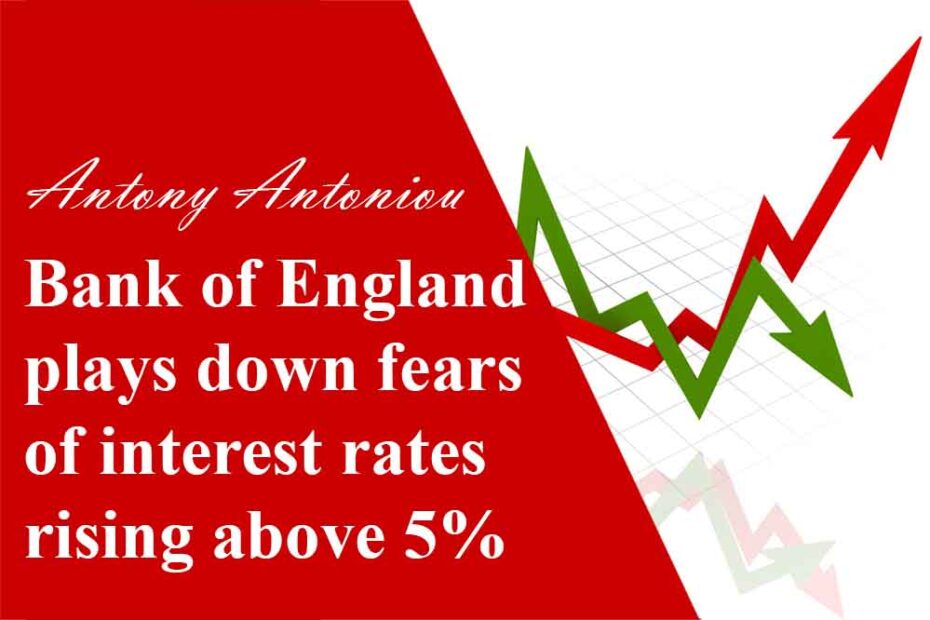 Aggressive rate hikes could crash the UK economy: Bank of England plays down fears they will rise above 5%

Interest rates may not rise as much as feared, the deputy governor of the Bank of England said yesterday.

In a boost to millions of borrowers worried about higher repayments on their mortgages, Ben Broadbent dampened expectations that rates could peak above 5 per cent next year.

And he warned that if rates were in fact hiked on such a scale, it would deliver a ‘material hit’ to the economy.

The comments came hours before markets switched their attention to Westminster and the resignation of Liz Truss as Prime Minister, which prompted a rally in the pound.

At one stage in her short-lived premiership, investors believed interest rates would peak at more than 6 per cent in 2023. That was during the market turbulence that followed Kwasi Kwarteng’s disastrous mini-Budget.

Those expectations cooled after Kwarteng was sacked and his replacement as Chancellor, Jeremy Hunt, binned most of his tax-cutting plans.

But Broadbent suggested that estimates interest rates could reach 5.25 per cent were still too high. ‘Whether official interest rates have to rise by quite as much as currently priced in financial markets remains to be seen,’ he said during a speech in London.

The remarks come ahead of the Bank’s next interest rate meeting in two weeks’ time. The comments prompted markets to scale back their bets on a super-sized one percentage point hike in rates at that meeting.

The likelihood of such a big move was reduced to 17 per cent, down from 25 per cent. Bank rate is now forecast to peak at about 5pc next year. The Bank of England started increasing interest rates last December in the battle against inflation, which is at a four-decade high of above 10 per cent.

However, the pace of increases has looked sluggish in comparison to the US Federal Reserve which has hiked rates much more aggressively. But Broadbent warned that a tougher stance would not be without cost to the wider economy.

‘If Bank rate really were to reach 5.25 per cent, the cumulative impact on GDP of the entire hiking cycle would be just under 5 per cent – of which only around one quarter has already come through,’ he said. ‘It would imply a material hit to demand over the next couple of years.’

The remarks looked designed to cool interest rate expectations that soared in the aftermath of the mini-Budget.

In a report, economists at ING said: ‘The Bank essentially faces a choice between hiking aggressively and baking in the ultra-high level of mortgage and corporate borrowing rates, amplifying the depth of a recession – or undershooting market expectations, at risk of a weaker pound and more imported inflation.’