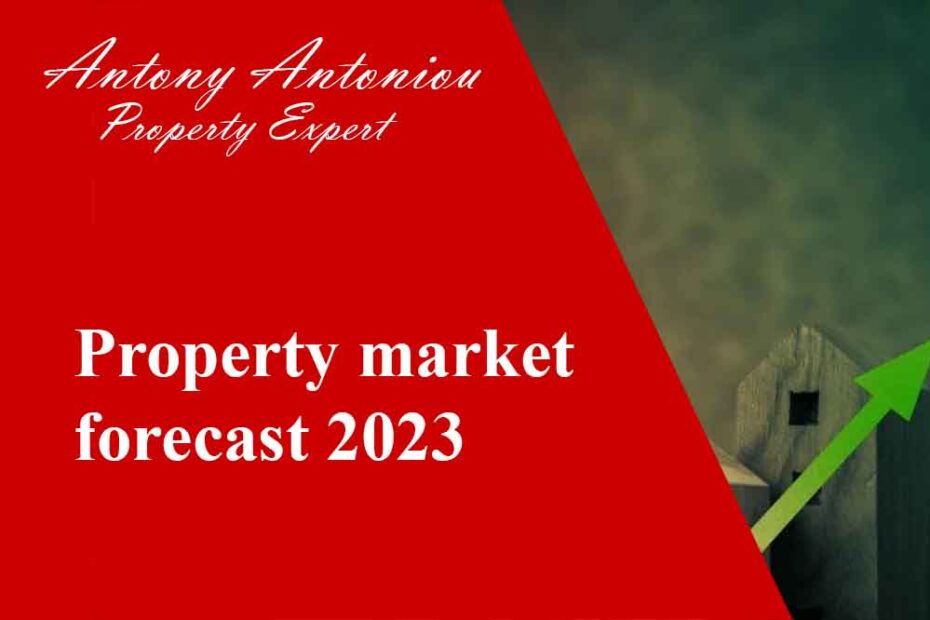 Halifax expects house prices to fall next year due to higher interest rates and the rising cost of living. We explore what will happens to house prices in 2023 as the market continue to slow down.

The UK housing market had a rocky 2022 and although prices peaked in August, they have since been falling. The latest Halifax House Price Index shows house prices fell for the fourth consecutive month by 1.5% in December 2022, with the typical house in the UK now costing around £281,272. Back in August 2022, it was £293,992.

House prices started 2022 on a high, continuing an extended period of rapid growth that began early in the pandemic, thanks to a combination of stamp duty cuts, low-interest rates and the “race for space” throughout lockdowns.

But the tide turned for house prices in the second half, especially over the last few months.

Activity in the market remained above pre-pandemic levels, and annual house price growth ranged from 10% to 14.3% for the first eight months of the year. “Between January and August, the average UK house price increased by almost £20,000, from £255,556 to £273,751,” Gardner notes.

The housing market’s performance was “all the more surprising since housing affordability was already stretched in a number of important respects”, says Gardner.

“Deposit requirements had become increasingly onerous as a result of house prices outstripping earnings by a wide margin in recent years. A 10% deposit on the typical mortgage on a first-time buyer property increased to almost 60% of annual gross earnings – an all-time high.”

The turbulence that followed the mini-Budget at the end of September started a new (and negative) chapter for the housing market. Mortgage applications fell as rates rose, and the price increases “fundamentally changed the affordability dynamic for prospective buyers”, says Gardner.

“For example, when mortgage rates moved towards 6%, the monthly mortgage payment on a typical first-time buyer property (bought with a 20% deposit) increased to the equivalent of 45% of an average worker’s take-home pay,” says Gardner.

Data continue to point in the direction of slowdown, with Halifax saying it expects prices to go down by 8% in 2023, which was almost inevitable following the UK housing market’s two-year-long boom.

“The first rule for anyone predicting the trajectory of house prices in 2023 should be to ignore any data from the chaotic final quarter of 2022. The latest data shows two things are happening at the same time. First, the effect of the mini-Budget is working its way through the system, which means that monthly declines are narrowing. At the same time, an annual fall in house prices appears imminent, underlining how the lending landscape has changed irrespective of the mini-Budget. As rates normalise, buyers will increasingly recalculate their financial position and house prices will come under pressure. We expect a 10% decline over the next two years, taking them back to where they were in mid-2021.”

House prices look likely to remain under pressure in the year ahead. Halifax expects higher mortgage rates, the rising cost of living and an economic downturn to add to the pressure.

Meanwhile, Nationwide predicts prices will come down by about 5% This could make next year a good time to buy a house.

Financial market conditions seem to have settled, but the mortgage market will take longer to normalise. UK Finance expects mortgage lending to fall 15% to pre-pandemic levels, and property transactions to fall by 21% next year.

Karen Noye, mortgage expert at Quilter, added: “While the phrase, what goes up must come down might be apt, Halifax also revealed that over the past 40 years house prices have gone up a staggering +974% since early 1983. Therefore, while it is likely that the cost pressures associated with the current economy will cause there to be a drop in house prices in the short to medium term, when viewed through a historical lens a 10% or even 15% drop over the next few months would represents a minor blip in a housing market that has largely had a significant upward trajectory.

“That said, people will really start to feel the pinch from energy bills over the next few months and unless they simply can’t afford their bills and need to move, people are going to be much more cautious about tackling a move with all the expense that comes with it. This slowdown in the market and a potential increase in housing stock will at least during the start of 2023 likely to continue to depress prices.

“Though the limited supply of properties for sale will continue to support prices, the pandemic-driven surge in demand has receded, and we’re emerging out of more than a decade of record low-interest rates.”

The Office for Budget Responsibility predicted prices will fall by 9% over the next two years.

In his first speech of 2023, prime minister Rishi Sunak, said eh expects inflation will halve this year. This could see mortgage rates drop too.

“Without high inflation, the Bank of England will have less reason to keep raising interest rates, and this will feed into mortgage rates reducing. The best deals could be back to around 4.5% or 4% by the end of the year, and even lower after that assuming the direction of travel remains the same and we don’t have any other major economic or geo-political shocks,” Noye added.

Why are house prices falling?

A combination of factors are hanging over the UK housing market.

Mortgage rates have increased exponentially over the last 12 months. They peaked at around 6.65% after Kwasi Kwarteng’s mini-budget pushed up the cost of borrowing.

In the middle of December the Bank of England raised interest rates to 3.5%, their highest since 2008, as it continues its battle against double-digit inflation. So, the cost of borrowing will remain higher.

The BoE’s is raising rates as it tries to bring inflation under control. Although the latest figures seem to suggest inflation has peaked – CPI fell to 10.7% in November from a 41-year-high of 11.1% in October – cost of living pressures remain, driven by higher food and energy costs.

Despite the energy price guarantee, which means the typical household is paying around £2,500 for energy bills, prices will still be going up by 20% April 2023 which will start a new wave of inflation.

It has been reported that the rate rises have also hurt the UK’s economy; it shrank 0.3% in the three months to October. “Unemployment is expected to rise and reach around 5.5%,”  “This is relatively low by historical standards, but will be challenging for many people.

“While inflation as a whole may be close to or at its peak, household energy bills are likely to rise again, putting more pressure on household budgets.”

Many will undoubtedly still go ahead with their purchases and the chronic lack of housing supply will prevent prices from coming down too much. But potential buyers facing the rising cost of living looking at unfavourable rates might choose to postpone their plans, which will likely fuel the downward trend.

Factors that will cushion price falls

Whilst there has been a significant exit from the buy to let market by landlords in recent years, due to changes in legislation, notably, the Section 24 tax changes, which have put some landlords in the ridiculous position of making a loss by renting property, this has been mitigated by the quiet but very significant entry in to the market of institutional investors.

Over the last two years, over 15% of residential sales have been to institutional investors, with Lloyds having announced that they intend to be the largest landlord in the UK by 2025.

The growing number of properties that are not owned by owner-occupiers has had a drastic effect on the residential property market. On average, there are only 60% of the available properties for sale in the UK than there were twenty years ago. The main reason for this is that the number of properties owned by investors has been steadily increasing as a percentage of the entire stock of around 28 million homes. The ration of ownership has been quietly evolving again over recent years, with less private landlords and more institutional investors.

On average, people in the UK move every six years, resulting in a steady flow of property coming to market by rotation, making it available to those wanting to enter the market or move upwards. However, once properties are in the hands of institutional investors, they will never come to market again, therefore reducing the available stock at a steady, but significant rate.

At the current rate, private ownership of property in the UK will continue to fall and actually accelerate over the next decade. The falling volume of available property will ensure that any fall, will be cushioned by investors entering the market, once they feel confident to enter the market and continue buying.

Rightmove reported that the number of properties being launched on Boxing day was a record 46% higher than last year. Whilst this was portrayed in a positive manner by Rightmove, for obvious reasons, this is a clear indication that there are many people wishing to sell their home before prices fall further and possibly before their fixed mortgage deal ends, which will result in their payment rising by as much as 300% making it unaffordable.

The continued false narrative by many agents, who refuse to acknowledge the fall in prices does not help their clients. The worst course of action is to enter the market too high at this point, as an future reductions could potentially result in the sellers ‘chasing a falling market’ without being anywhere near a realistic ‘strike-price’

Professional agents will be brutally honest with their clients, but this does also have a positive side to it. Whilst first time buyers need to be very cautious, as buying too high with a small deposit could result in them being in negative equity for years, (it normally takes around eight years for property to recover to a previous peak) the situation for next time buyers could actually be positive.

For those moving to larger properties, the fall in prices could actually benefit them, depending on their loan to value ratio of course, as any fall on their own property, could actually save them money if they ensure that the fall is reflected in their onward purchase, as a percentage of asking price.

The forthcoming year will definitely be a bumpy road, but amongst the distress sales, their will invariably be a lot of opportunities for the savvy investor, provided that they sift through the misinformation. They must also bear in mind that sales figures announced today, are not for sales agreed today, they are for sales agreed many months ago, prior to the exponential rise in interest rates, prior to inflation rising anywhere near the level it is today and prior to Kwasi Kwertang’s catastrophic mini-budget.